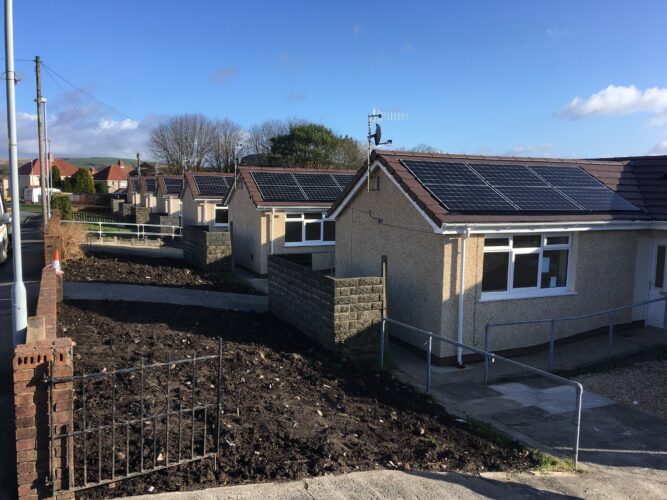 DECARBONISING 13,500 council houses in Swansea would put “significant strain” on the authority’s finances, a meeting was told.

The council has estimated it will cost £350 million to meet decarbonisation targets which are expected to be a legal requirement for all social housing in Wales.

Separately, the authority is close to finishing a huge modernisation of its housing stock, including energy efficiency measures, at a cost of just under £500 million.

That would mean around £60,000 being spent on every house and flat to complete the two programmes.

The forthcoming decarbonisation drive is one element of a wider ambition for Wales and the UK to become “net zero” in greenhouse emissions.

Social housing landlords in Wales, including councils that own their own homes, would be asked to meet the decarbonisation target by the end of 2030 under the current Welsh Government proposals.

It would mean houses becoming very thermally efficient so as not to lose heat, and also generating power via solar panels and storing it with batteries. The trickiest element, for now, would be replacing gas boilers with low-carbon heating systems.

Housing officers told a council committee that the £350 million figure was an estimate and that costs could come down if the supply of energy at the grid level became cheaper and lower carbon than currently.

But officers said that decarbonisation presented a big challenge financially.

One of the officers, Mark Wade, said the £350 million cost would exceed what the council could prudently borrow at present.

“It would put significant strain on our (housing) business plan,” he said.

“Welsh Government support is going to be paramount.”

Mr Wade said the council would respond to an expected consultation over the summer before the decarbonisation measure became law.

The benefits of decarbonising housing are lower bills for residents and new jobs, as well as wider environmental improvements.

The council has trialled two small-scale decarbonisation projects, including the transformation of bungalows at Ffordd Ellen, Craigcefnparc, which has resulted in energy bills of around £1,300 per year reducing to £410.

Cllr Mike White asked if private housebuilders would have to build decarbonised homes.

An officer said the expectation was that schemes carried out by social housing landlords would pump-prime the housebuilding sector more widely.

Martin Nicholls, the council’s director of place, said private housebuilders could argue – sometimes with justification – that the additional costs would make schemes less viable, particular in areas where the cost of land was low.

But she also pointed out that the council has an ambitious house-building programme of its own to add 1,000 homes to its stock over the next decade, as well as maintenance costs to consider.

The next council scheme to be completed will be 18 new homes at Colliers Way, Portmead, next month.

In answer to concerns raised by Cllr Paxton-Hood Williams about borrowing requirements, Cllr Lewis said: “One thing we will never do is borrow beyond our capacity – that’s illegal.”