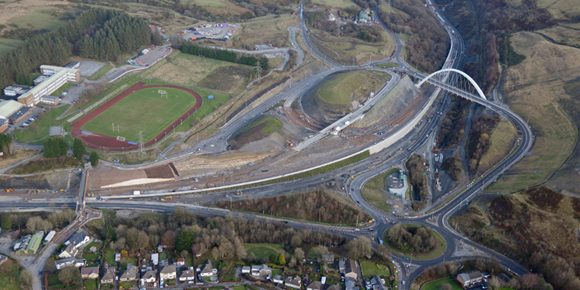 THE A465 development is one of Wales’ biggest infrastructure projects. Section 2, between Gilwern and Brynmawr, involves the widening of the steep sided and environmentally sensitive Clydach Gorge.

Here are the facts and figures that demonstrate the scale of the scheme.

1. The development will create a 5 mile dual carriageway

This will benefit the estimated 21,000 vehicles that use the A465 between Brynmawr and Gilwern.

Around 87% of the work is complete, including 2 new bridges at Glanbaiden roundabout and the concrete arch bridge at Gilwern – the largest of its type in the world.

2. The equivalent of more than 400 Olympic swimming pools worth of material has been excavated

This is more than 1.3million metres cubed.

3. There are 750 tonnes of steel in the Jack Williams Gateway Bridge

The Jack Williams Gateway Bridge was named after a local World War One hero, following a public vote. The blacksmith from Nantyglo was awarded the Victoria Cross after single-handedly overpowering a German machine gun post in France and capturing 15 of the enemy. The bridge spans 118 metres and crosses one of South Wales’ most important environmental and ecologically sensitive areas.

The scope of the scheme, as well as its complexity, has brought a range of employment and training benefits to Wales and the local community.

More than 270 new jobs, 69 new apprenticeships and 120 work experience opportunities have been created. 300 school and college initiatives have been delivered, and 171 educational site visits have taken place

The scheme has been designated National Skills Academy status by the Construction Industry Training Board, and received the Careers Wales Silver Award in 2019.

These trees within the scheme’s footprint help to reduce greenhouse gases and improve air quality.

Local nature has benefitted from the Lapwing Mitigation project, which has seen three to four breeding pairs return to the site, and more than 6,850 tonnes of recycled glass has been imported from a local provider.