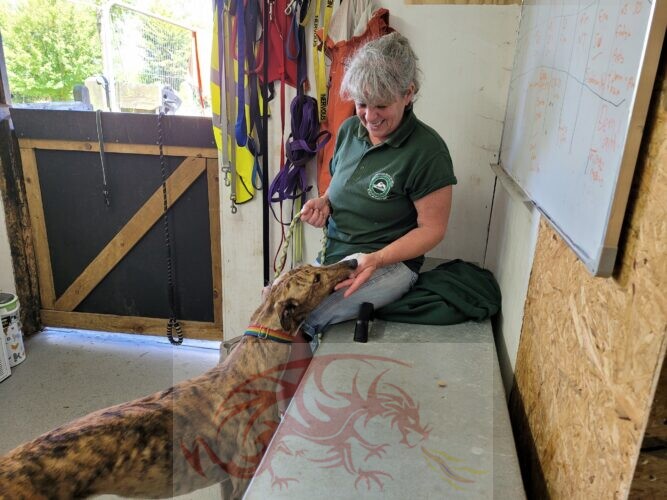 GREYHOUNDS and lurchers will enjoy some luxury kennel accommodation in Carmarthenshire after a charity’s planning application was approved.
And visitors to Greyhound Rescue Wales’s redeveloped Hillcrest site in Garnant, near Ammanford, will have a sensory garden and memorial garden to check out as well as the dogs.
The charity has been keen to expand and modernise its kennels with a new timber-framed structure, to include a covered “public square”, reception area and kitchen, for a while.

Under the plans the current kennel space for 13 dogs will increase to 24, which is the maximum granted by a previous application.
There will also be a recovery unit for injured dogs, and indoor exercise and training space.
A spokeswoman for the charity’s trustees said it wanted to provide comfortable accommodation for the dogs and the people who look after them which will be warm in winter and cool in summer, cost-effective to maintain as well as having a minimal environmental impact.
A design and access statement submitted as part of the application said it had taken two years to develop the planning brief.
The current buildings, it said, were inefficient in a number of ways.
“Ultimately, we aim to create a building that GRW (Greyhound Wales Rescue) and all its supporters can be proud of,” said the report.
The charity intends to apply for grants and fund-raise to pay for the scheme, which will include underfloor heating and solar panels.
Carmarthenshire Council planning officers imposed a number of conditions with the approval, including set feeding times.
Llanelli Ramblers responded to the application, requesting that an existing footpath adjacent to Hillcrest should be maintained.
There was an objection from a neighbour, who said barking and howling “at all times of night and day” would increase if the application was given the go-ahead.
She also claimed her existing right of way across the land at Hillcrest could be impeded by the new building, and that the tree-planting scheme proposed as part of the scheme gave rise to the risk of root damage to her septic tank.
Greyhound Rescue Wales was set up in 1993 by people trying to rescue greyhounds and lurchers in the Swansea area. It has grown since, and became a registered charity in 1996.
Asked how much the Hillcrest scheme might cost and when work could start, the charity’s spokeswoman said: “It is an ambitious project and all we can say at this stage is that the cost will be substantial.
“We will be applying for all the grants available to us through charitable funds and other sources of funding.”
She said it would be at least a year before work got under way.