A group of schoolchildren have opened a new bridge in Gwynedd and become the first people to walk across it, following a year-long road closure.

The 16 pupils from Ysgol Felinwnda near Llanfaglan also had the chance to talk to staff from the Balfour Beatty Jones Bros joint venture, which is delivering the £135m Caernarfon and Bontnewydd Bypass project.

The bridge forms part of an unnamed road, known locally as Lôn Felinwnda, which adjoins the bypass site. 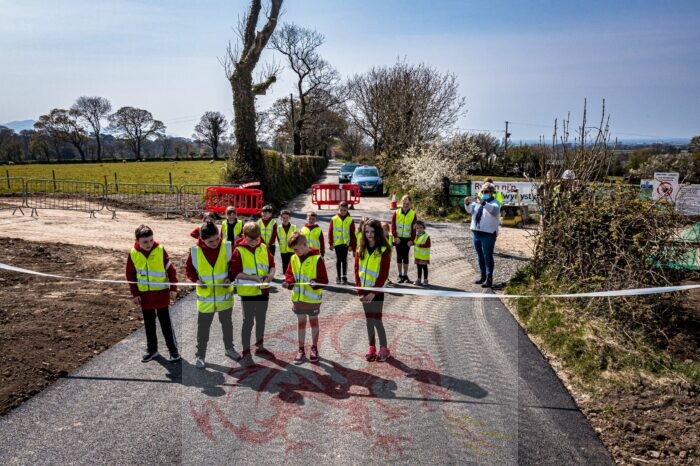 Four year 6 pupils, having also experienced their own share of closures over the past year, had the honour of cutting the ribbon.

Carys Thomas, headteacher at Ysgol Felinwnda, said: “The kids really enjoyed the experience, having a look at the new road and the new bridge, and they were all pleased to receive a goodie-bag as well.

“We gave the honour of cutting the ribbon to year 6 because while it’s been an awful year for us all, we wanted to give those children something pleasant to remember from the school in their final months.

“They were amazed by the road itself, so some of the girls and boys may well now want to find out more about becoming a civil engineer.”

The Balfour Beatty Jones Bros joint venture has also assisted the school in supplying a new external gate, as well as helping with secure outdoor storage.

Elgan Ellis, roads lead on the project, said: “Many of the pupils will have seen the bypass being built from a distance, so it was fantastic to welcome them to the site to see the work close up.

Giving youngsters the chance to find out more about civil engineering in a practical setting is something we really value, and we’re glad the easing of lockdown restrictions allowed this to happen.”