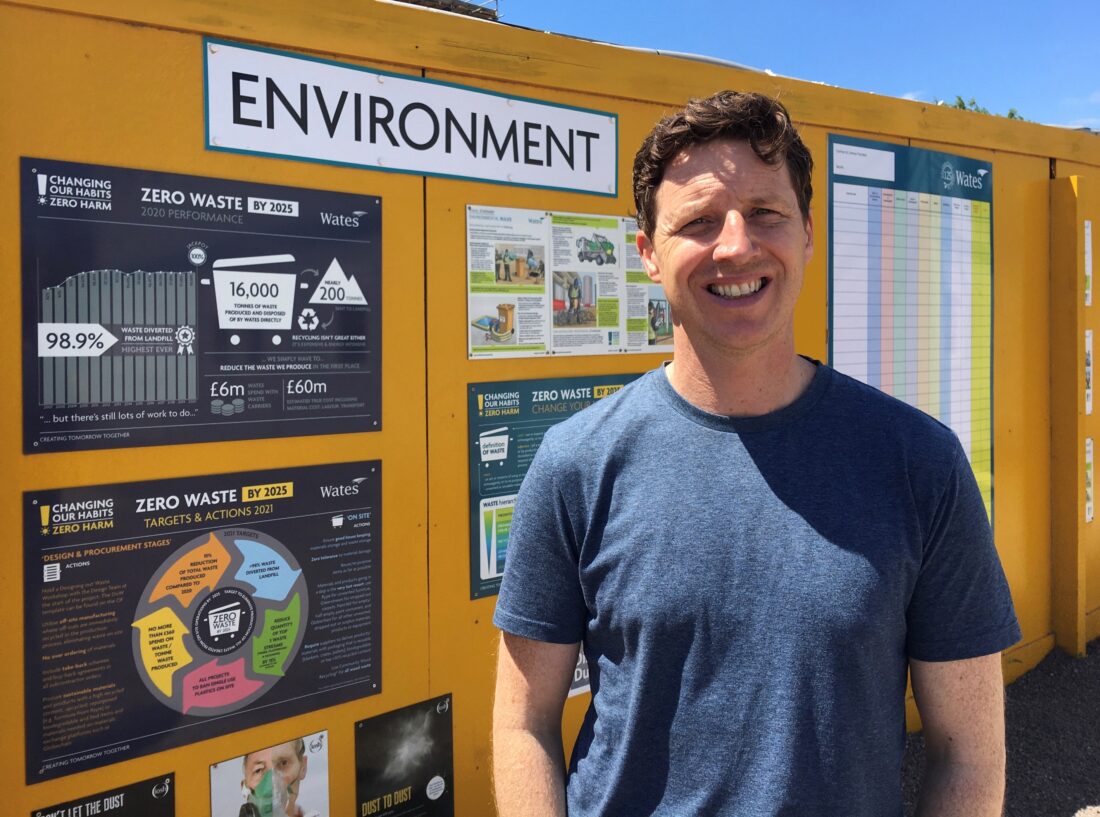 THE levels of air pollution in some of Cardiff’s neighbourhoods have been labelled a “huge concern” by the local authority’s Cabinet Member for Climate Change.

The newly-created cabinet role of climate change was recently taken on by the former Cabinet Member for Transport and Strategic Planning at Cardiff Council, Councillor Caro Wild.

Bringing in the new cabinet role at the council was in large part influenced by the declaration of a climate emergency by the local authority in 2019 and the need for it to reach its net zero target by the year 2030.

Recycling, energy and waste are all some of the key areas that the new portfolio will encompass.

In the sitting room of a showhouse at Aspen Grove, Rumney – an award-winning sustainable housing development which is still under construction – I sat down with Cllr Wild to ask him what his top priorities are in his new role.

What would you say your three main priorities are going into this new cabinet role?

“It’s really interesting, because I think climate change has become a bit of a catchall for loads of very different things.

“I don’t know if these are the top three priorities, but if I could separate them slightly, one is that we know around the world the amount of carbon we’re emitting is far too much and we need to reduce it. Otherwise, the planet will become uninhabitable.

“Cardiff is very clear. We’ve got to play our role, everyone in cities around the world – we’ve got to vastly reduce the amount of carbon going into the atmosphere.

“We have committed to doing that. That’s absolutely the most important thing that everyone around the world has got to do and Cardiff will play its part, but then you also look at the impacts of climate change on Cardiff.

“We are a coastal town, there are rivers coming in and so the risks of flooding are very real for Cardiff and we saw them. They are not something we’re thinking about in the distant future, they are happening now.

“Although, thankfully our coastal defences have been really strong and actually, when you look at our river defences, they worked really well during Storm Ciara.

“And then, there’s just how we use our energy and our resources in the city. These both tie into the cost of living.

“A huge concern and I was very involved with the air quality work in my previous role and will carry on being involved in that. It is a massive concern – the WHO figures, which are startling really. They have brought the limit right down to 10 [micrograms per cubic metre] I think.

“We have always said there is no safe limit, but I don’t think there is any town or city in the whole of the UK that wouldn’t have figures above 10 in most of their areas.

“We have got areas of the city where it’s getting close to 40 never mind the 10, so a real focus on getting those, but also recognising that there’s no safe limit. All of our transport white paper had air quality at its heart.

“Probably the biggest driving priority of that whole white paper was to do with air quality because that is affecting all of our citizens’ health every day. When you look at all of the moves to active travel, the work we’re doing on public transport, the targets have to do with air quality.”

Cardiff has a target to get to net zero by 2030. That doesn’t seem too far down the line really. How much of a challenge does Cardiff have on its hands to reach that target by then?

“It is similar with what some other authorities are doing. We have been reducing our carbon emissions by about 17% or 18% a year by some of the retrofitting that we’re doing, the stuff we’re doing around schools. But, there’s a huge way to go.

“What we have found is that we have done some really good work in our One Planet. We declared a climate emergency but then really spent a year or two doing pretty serious in-depth work into what that actually means in terms of where the carbon is coming from and how we’re causing it.

“We didn’t just want to do it as a statement and then do something around single plastic bags and then give up. We wanted to be really clear about what the actual problems are and what it has shown us is that the biggest factor that the council has is its procurement.

“So 80% I think of the council’s carbon emissions are still our responsibility – 80% of them are from our procurement, so the services, goods and supply chains.

“We are committed to doing it and we’re going through each department now with an understanding of how much carbon they’re emitting and responsible for and really working out what the actions are to do that.”

We talked about lowering air pollution levels and helping Cardiff meet its net zero target. How important would a congestion charge be in helping to achieve this?

“If you look again at the white paper, that really clearly sets that out. Right at the beginning, it says our climate targets and climate crisis, it says about our pollution.

“There is no indication that the government is suddenly going to spend billions of pounds on upgrading a Metro in Wales, so we have said that we’re going to have an honest conversation about the different ways that a lot of these things can be funded and that’s where we’re at now.

“Every time everyone asks us, we say the same thing. We have got a lot of really good analysis work being done on it so we can understand the economic impacts and the health impacts.

“Public Health, the Welsh Government have given us massive praise for actually taking on these difficult issues. It is becoming very clear, not just behind closed doors but in public as well, that at UK Government level they are going to have to look very seriously at road user charging or congestion charging.

“The Welsh Government have said that they are very open about that. Everyone at every level of authority is saying that in the future, these are the kind of things we need to take seriously.

“We have been saying that for a couple of years now. There’s work going on so we understand all the implications.”

Littering is an issue that seems to spike in Cardiff over the summer period. How much of a concern is it for you, seeing the level of litter in some of our parks at this time of year?

“I get really concerned when I see the levels of litter in urban residential areas. With parks, I think you have just introduced it really well. It does spike and it’s easy to take a photo of it and it looks terrible.

“Usually the day after it’s all cleared by our staff who are just amazing. Often, I’ll get a photo of a bin on social media overflowing in the park in the area I represent.

“They take the photo and an hour later it will be cleared up. The public just need to realise their use of resources and it’s not fair for people to just leave litter in the park.

“They can bring their stuff to the park, they can take it home with them. I don’t just want to put hundreds of bins everywhere all over the park.

“That would spoil it and we’re trying to get people out of this idea that they can just use this waste and chuck it around, both because it’s a waste of resources and everything we’ve just talked about, but also it’s just not fair on our staff either.

“It is very difficult for us to design a staffing and resourcing structure based on whether it’s a hot day or not, so some of that is just difficult to manage. We would ask the public to do a bit better on some of that and the use of waste, but we do clean it up pretty quick.”

In one news report about littering in Cardiff recently, one resident who lives in Pontcanna said it is an issue that has been getting worse for years and they called Cardiff the dirtiest city they have spent time in. How can you reassure residents that streets and parks will get cleaner in the future?

“They will. I don’t particularly agree with that analysis of it and I think when you look at the facts of how clean the city is, I think in terms of the number of streets that are clean and our parks, we have got green flag awards that you don’t get if you have got filthy parks.

“I don’t know how many we have got now in the city, but we keep getting our green flag awards renewed every year and that’s partly because they all look so good and our parks are generally spotless.

“It’s something we’ve just got to massively keep on top of, but the big thing we need to do is to change people’s mindset when it comes to this waste and culture of we just throw things away or in the bin and if the bin is full, we just leave it around.

“We need people to understand the resources they’re using when they are making their day-to-day purchases and being responsible for that, and we’ll try to help with that around people’s residential recycling collections and in parks and certainly trying to make it easier for people to do, but we have all got to share that burden.”