Plans to build an Aldi supermarket on the seafront in Porthcawl have led some locals to fear for the future of the town’s tourism industry.

Aldi Stores Ltd wants to build a supermarket on land at Salt Lake, Porthcawl, which would create 40 new jobs but some locals believe it will damage tourism and harm local businesses.

“Porthcawl is a tourist town and tourists don’t come to admire the view of an Aldi,” said local resident Stephen Beer.

“It’s just too prime a location to put a shop on. I haven’t got a problem with having an Aldi in Porthcawl, it’s just completely the wrong place for it. You could put a Harrods there and it wouldn’t make any difference it’s still going to wreck the view.”

He also said the competition from an Aldi supermarket could damage other smaller businesses and as a result local people could lose their jobs. 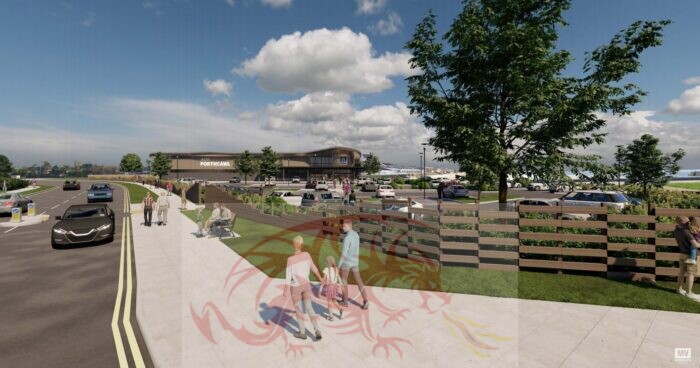 Aldi purchased the land at Salt Lake from Bridgend County Borough Council (BCBC) in January and has submitted a planning application to build the new store to the local authority.

The council sold the land to the German supermarket giant for 999-year lease and the store could be built within two years. An artist’s impression of what the building could look like was recently shared by Aldi and the council.

Salt Lake is currently used as a car park and is popular among tourists visiting the town. Mr Beer said building a supermarket on the site would make existing traffic issues worse. 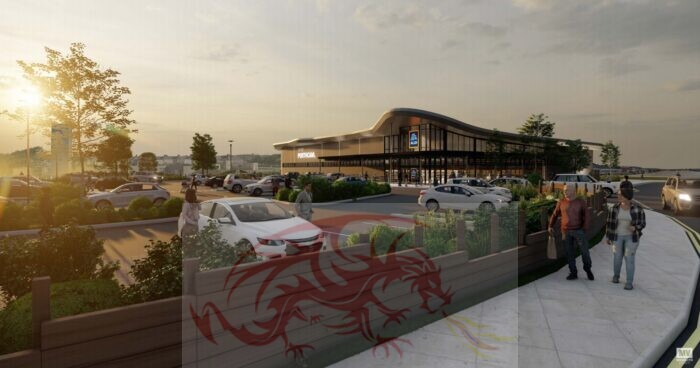 “It’s going to have a massive impact on John Street and the little shops around there,” he said. “It could have a major impact on tourism because it’s taking away a large part of the biggest car park here.

“On sunny days and bank holidays, the town and residential areas are already overrun with people coming in for day trips. If you take away a major part of the car parking facilities here it’s making a bad situation worse.”

Resident Suzanne Padden is also concerned with the impact the supermarket could have on traffic in the area. She said the town has been “overflowing” with cars in recent moths, as the town has opened up to large numbers of visitors following the lifting of lockdown measures.

“If they reduce the parking what happens then? Most of the population will not use a bus to go to the seaside.”

She said the council is likely to “put in a shop then do nothing as [it has] no money” and “then they will add housing at a later date… so we end up with a giant housing estate”.

Mr Beer agrees that even a park and ride service would not solve issues with traffic in the town.

“It’s absolutely ludicrous if you think a mum and dad with two kids are going to park five or six miles away and queue in line to get on a bus. It’s just not going to happen.”

Rhys Lloyd, who has lived in Porthcawl all his life, said he thinks Salt Lake would be better used as a site for new leisure services.

“Most Aldis are sort of in big town centres or on the outskirts of towns… and they’re certainly not overlooking beautiful beaches and the ocean. It’s not a reason anybody would come to Porthcawl. The town needs amenities that are going to bring in money for the right reasons.”

Mr Lloyd said Bridgend Council should look into installing a splash park along the seafront, like the facility that opened this week in Aberavon.

Mr Beer also said a splash park would be a good idea: “Porthcawl is right down the list of places I’d want to go right now. Barry is just a far nicer-kept beach – it’s regularly cleaned by the council… Aberavon now has just had a splash park put in. There’s just nothing here.”

He added that the council “just [isn’t] interested in doing anything”. “They’ll go through the motions of consulting but they rarely listen to anyone.”

Sarah Murphy, Labour MS for Bridgend and Porthcawl, said: “Having talked to a lot of constituents in Porthcawl and on social media, I think that it is fair to say that there has been a mixed reaction to the announcement about Aldi coming to Salt Lake.

“On one hand, it is positive because residents will not need to leave Porthcawl to do their big supermarket shop however, there are concerns about the impact on the local town businesses, environment and how the building will fit in with the rest of the planned regeneration.”

She addded: “As the Member of the Senedd for Bridgend and Porthcawl, I will be working alongside local business owners and residents to continue to raise their concerns with Bridgend County Borough Council. I am pleased that the Council has confirmed that no further planning for Porthcawl will be approved without a thorough consultation with the community, including an interactive exhibition.”

Jamie Wallis, Conservative MP for Bridgend, said: “Whilst I welcome investment in Porthcawl and the creation of jobs, it’s important that Porthcawl maintains its appeal to visitors to support the many independent retailers and local businesses.

“Many people remain concerned about the plans for parking. It’s imperative that residents are listened to and properly engaged as BCBC look to expand on this development.”

A spokesperson for the council said the Aldi store would only being built on a small part of Salt Lake – an area known locally as ‘The Green’ – and the conditions of parking have yet to be announced. They added that the other end of the site includes land reserved for future leisure use.

Plaid Cymru calls for curb of “land grab” for “greenwashing”

‘We are bracing ourselves for one of the hardest winters we have ever faced, but will keep essential services running,’ vows NHS Wales chief executive