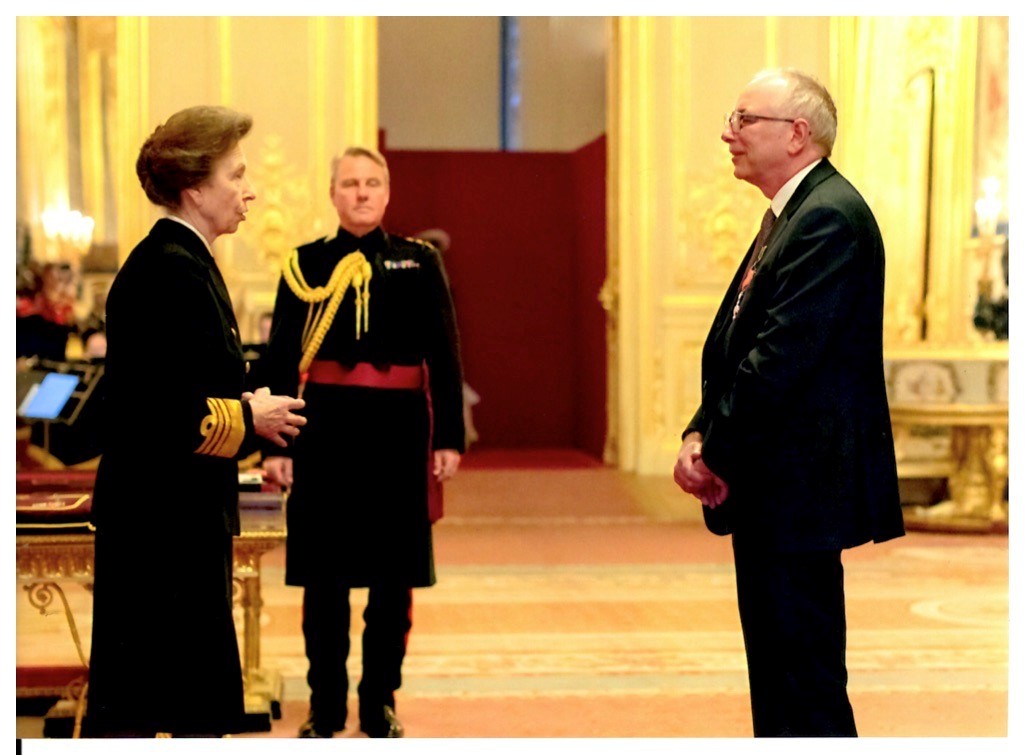 Congratulations to Nigel Miller, Speech and Language Therapy (SLT) Lead at Hywel Dda University Health Board, on being appointed a Member of the Order of the British Empire (MBE).

Nigel received his MBE during his investiture at Windsor Castle on 16 November in recognition of his service to people with learning disabilities.

“I am slightly overwhelmed at being singled out for this honour,” said Nigel. “There is no doubt that I would not have got it if I hadn’t had the opportunity of working with some amazing people who happen to have been labelled with the term ‘learning disability’, as well as outstanding and talented colleagues, a forward-thinking organisation and a truly supportive family.”

Nigel began working in Carmarthenshire in 1986 as the only speech and language therapist within the mental health/learning disabilities directorate across Carmarthenshire, Ceredigion, and Pembrokeshire. He later built an award-winning team of 14 specialist SLTs and SLT Assistants.

Nigel joined the learning disabilities service in 1992 and is a member of the Learning Disabilities Ministerial Advisory Group.

He was formally recognised by the Council for Professions Supplementary to Medicine when he assisted in its transition to becoming the Health and Care Professions Council.

In 2003 Nigel attended a reception at 10 Downing Street in recognition of his work in promoting allied health professionals.

He chaired the all-Wales SLT managers, and as a Wales Therapies Advisory Committee representative in 2007/08, was also instrumental in developing a case for the establishment and appointment of executive therapy directors on the then newly formed health boards in Wales.

Nigel was later presented with the Royal College of Speech and Language Therapist’s Fellowship Award at an award ceremony held in Westminster in October 2011.

Further, he played a crucial role in the development of wayfinding signage, initially at Withybush Hospital and then many hospitals across the UK. This has been designed to help people with learning disabilities find their way around hospitals more easily.

The outcome had a positive response amongst people with learning disabilities and the general public. This project gained international attention and accolades from both his peers and the Welsh government, winning the ‘Citizens at the Centre of Service Re-Design and Delivery’ award at the NHS Awards 2013.

“I have severe haemophilia, which means my blood doesn’t clot without treatment, so I spent a lot of my early life on a children’s ward in Devon. I saw a lot of doctors, nurses and therapists as a child, this inspired me to work in the NHS,” Nigel added.

In 2019 Nigel was the recipient of an NHS Wales Award, for ‘empowering people to co-produce their care’.

Nigel’s passion for involving people with learning disabilities in the development of services lead him to pioneer a volunteering scheme to engage service users in audits and strategy development.

Nigel is a keen supporter of the ‘Dream Team’; made up of people with learning disabilities who represent the wider learning disability population at Regional Partnership meetings. The Dream Team developed The Learning Disabilities Charter, which identifies what people want from services.

He explained “It is an honour to be part of the Dream Team and I am proud to be part of an organisation (Hywel Dda University Health Board) which has signed up to the Charter and is keen to make a difference”.