BBC One Morning Live’s Gethin Jones has teamed up with The National Lottery to celebrate The People’s Benches. Gethin unveiled community hero Rhian Mannings’ bench at Royal Glamorgan Hospital in Wales, marking the work of her ‘2 Wish Upon A Star’ charity.

Port Talbot local, Mal Emerson, founder of ‘Marauders Men’s Health’ charity has also been recognised and honoured with a bench in his name, a lasting community tribute to his work in the local community.

The UK-wide series of bench installations, designed by BBC Repair Shop’s Jay Blades, honours those who went above and beyond for their local communities during the pandemic. 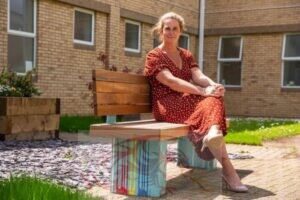 During the pandemic, players of The National Lottery have raised over £1.2bn of funding awarded to respond to COVID-19, the largest contribution made to the pandemic relief effort outside of government.

Today, The National Lottery has revealed six further locations across the UK which will play host to bespoke benches, designed and created by Jay Blades, to honour individuals who went above and beyond for their local communities during the pandemic.

The People’s Benches project first launched in 2020, selecting exceptional community heroes to honour from over 13,000 community projects funded by The National Lottery Community Fund since the start of the Covid-19 pandemic.

As the country celebrates the upcoming easing of restrictions imposed during the pandemic, The National Lottery has unveiled the final six benches; working with Gethin Jones to bring to life some of the inspirational individuals behind them, including fellow Welsh national Rhian Mannings.

In a moving video, released today, Rhian and Gethin discuss her heart-breaking experience back in 2012, when her one-year-old son George died suddenly, followed by her distraught husband Paul taking his own life just a few days later. 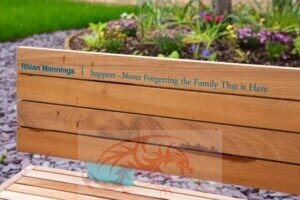 The incredibly moving piece sees Rhian speaking to Gethin about how she and her family came to terms with their loss. Gethin and Rhian go on to discuss Rhian’s creation of ‘2 Wish Upon A Star’ charity which aims to help families coping with bereavement.

The video features the touching moment when Rhian sees the bench that has been dedicated to her for the first time, in place outside the Royal Glamorgan Hospital in Wales, which is the hospital which treated George over 8 years ago.

Talking about receiving the bespoke bench Rhian Mannings said: “I was really shocked when I received the phone call, especially at the moment as there are so many incredible people out there; it means the world to me. This is for the amazing team and my parents and family, who’ve done so much to encourage and support me.

Gethin Jones says, “Being part of the reveal of Rhian’s bench was an unforgettable moment for me; her story was so moving, and her charitable community work is incredibly inspiring. I am so proud and honoured to be part of this meaningful campaign by The National Lottery Community Fund, which celebrates those local heroes vital for the community, but who are sometimes overlooked. 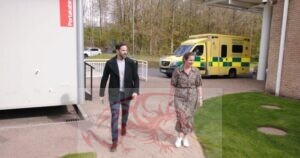 “It’s an incredible opportunity to shine a light on inspiring individuals, and to celebrate the £36 million which is raised by Nationl Lottery players each week in the UK for good causes like this.”

And there is a double celebration in Wales with a second bench dedicated to local port Talbot man, Mal Emerson. Mal formed ‘Marauders Men’s Health’ charity in 2017 after suffering a horrendous industrial accident in 1997, resulting in permanent leg injuries and Post Traumatic Stress Disorder, which caused deep entrenched mental illness. Walking has helped Mal, who has generated more than £4.5m worth of funding for good causes in Port Talbot, cope with his mental scars.

He started undertaking some short walks on crutches and as a photography fan, he would post photos up on Facebook. Requests soon came in from people to join his walks where the group would discuss their physical and mental health challenges, helping and inspiring each other. ‘Marauders Men’s Health’ was soon established. During the pandemic, Mal worked hard to keep the walks going but downsized to 1-2 people to ensure the members are still getting the support they needed during a critical time. 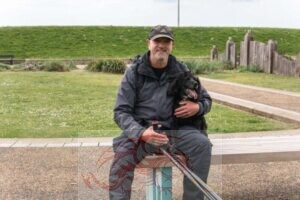 Mal Emerson said: “I wanted to try and inspire men to talk about mental health more who went down the roads I went down. Thanks to people buying National Lottery tickets we’ve now managed to secure funding to employ staff full-time, and I’m fully employed right now. It’s making a hell of a difference and it’s incredible.”

Mal’s bench is installed on Port Talbot sea front will feature design motif of a walking boot track print. An in-built QR code will allow visitors to the bench to listen to an audio recording of Jay Blades regaling Mal’s story.

Jay Blades said: “Like most of us, I have witnessed inspirational acts of selflessness and kindness this year as people have adapted their lives to help others. It has been an honour to hear about the 13 people whose work is being honoured with a bespoke bench being placed in their local area. Each bench represents the person’s personality, passions and the impact they have had on others in their community. It is hopefully a fitting tribute to their efforts this year – efforts that too often go unheralded but never unappreciated by those they help – that these benches can be places where others can find out more about their work.”

David Knott, Interim CEO of The National Lottery Community Fund said: “Throughout these challenging times, the power of individuals and organisations in supporting communities and people’s wellbeing has been so inspiring. As we reflect on the past year, I am proud to spotlight incredible individuals like Rhian, from 2 Wish Upon A Star amnd Mal Emerson, from ‘Marauders Men’s Health’ – they represent the best of human and community spirit. These community benches in local areas will help to showcase the impact they have had on others and to provide valuable space for reflection. Alongside Rhian and Mal, the local heroes featured from across the UK, have played an integral role in their communities. I am glad that The People’s Benches initiative provides a platform to recognise their outstanding efforts. Thanks to National Lottery players, we have funded over 13,000 community projects, across the UK, since the start of the Covid-19 pandemic.”