A collection of social media cards helping people use appropriate language when talking about Down’s syndrome, have now been released in Welsh.

New mum Becca designed the cards to help share with people the terminology she would like to see used when talking about her one-year-old son Arthur. They’ve since been shared thousands of times on social media and with funding from the Down’s Syndrome Association, have now been produced in Welsh.

“Getting language right is really important and Becca’s cards are simple, fresh and new. We have been using them with midwives in our Tell It Right ® training, and we are delighted to have been able to help produce them in Welsh so the message can be spread even further.”

Becca said: “I am grateful for the support in enabling these cards to reach even more people. It is only through sharing the campaign that the great opportunity for positive change exists. So, thank you to all the people who will read this and go on to share it. Positive inclusion for all in our society is not only crucial, it benefits everyone and together we have the power to make a positive difference.” 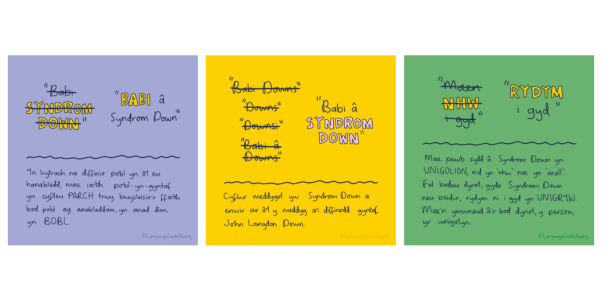 Becca, who lives in Cornwall with her partner Thom, admitted that she did not know very much about Down’s syndrome before having Arthur. She says lockdown gave her the time to reflect on the language she had experienced over the last year, and she decided she needed to make a change.

“I realised that any issue I thought I had with Down’s syndrome did not come from within me, it was the subconscious messages of everyday language that has constantly been fed to me, and is still being fed to me. Only with experience have I realised the extent of which – it is daily. From friends, consultants, health visitors, midwives and strangers.”

So Becca decided to send an ‘open Letter’ to her friends and family about the use of language and the impact inappropriate wording can have. She realised people wanted to say the right things but often didn’t know what that was. She’s keen to stress what she says is only ‘her’ view, but received such positive feedback from the letter, she felt compelled to make it her mission to spread the word further. 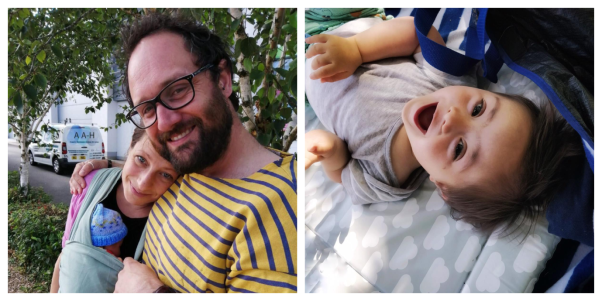 Becca decided to make the social media cards to try and encourage more people to think about their language. Working with her friends Bear and Pear design studio, they came up with a fun and unique design for the cards. She hopes new parents will download them and be able to use them in a similar way too.

“They are a resource parents can use. I made them for me and my community, but now I hope they will be used by other parents, hospital staff, speech therapists, physiotherapists – everyone, anyone, who can then put them on their own social media or print them off in whatever format they may need to help share and inform.”

Six men arrested in warrants carried out in Monmouthshire