No more fouls on the pitch! 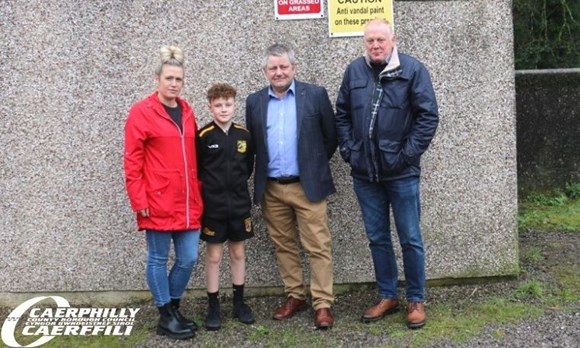 Since the introduction of the PSPO in October 2017 over 2,136 complaints of dog fouling have been investigated. 64 Fixed Penalty Notices have been served for either dog fouling or for failing to carry bags to clean up dog waste. There have also been 28 prosecutions of those who refused to pay the fine.

A ten-week consultation with residents and key stakeholders including Gwent Police, Dogs Trust, The Kennel Club was held in 2021. 85% of respondents agreed with the current restrictions and 54% agreed with the proposal to extend the order to ban dogs from marked sports pitches.

In May 2019, an informal consultation was carried out with 82 sports clubs across the County Borough. The informal consultation comprised of a questionnaire containing closed questions regarding dog fouling on sports pitches. Out of the 24 clubs who responded, 71% felt that the amount of dog fouling had increased or stayed the same and 88% supported prohibiting dogs from marked sports pitches.

Cory Cashman (Aged 12), Rugby player at Risca Rugby Football Club said, “It’s not nice to see dog mess on the pitch when I’m playing with both friends and with the club; it stops us from being able to run and play freely for fear we could fall in it.”

A common theme for supporting the proposal was to ensure a safe and clean environment for children and adults to exercise and to further encourage responsible dog ownership. Sports clubs also highlighted how often games are delayed or halted to deal with dog excrement on the pitch.

The Council aims to promote responsible dog ownership and reduce complaints for dog issues such as dog fouling. This allows the public, especially children, access to dog-free or dog-controlled areas intended for recreational purposes to improve health and well-being, making Caerphilly Borough a safe and enjoyable place to live.

The Council intends to reduce and tackle issues relating to dogs causing a nuisance to others and also to reduce the potential health implications associated with dog faeces.

The Council has approved a Public Spaces Protection Order in respect of six offences, these are:

Excluding dogs from all enclosed children’s play and multi-use games areas
Requiring dogs to be kept on leads in enclosed memorial gardens
Requiring dog owners to remove dog faeces in public places
Requiring dog owners to carry an appropriate receptacle for dealing with the waste that their dogs produce (that is to always have the means to pick their dog faeces)
Requiring dog owners to put their dogs on a lead when directed to do so by an authorised officer on any public land where the dog is considered to be out of control or causing harm or distress to prevent a nuisance.
Excluding dogs from marked playing pitches/areas
Regular daily patrols of the parks will take place to help educate and advise residents of the new restrictions that have come into force.

Residents can report breaches of the PSPO via the website, these referrals/complaints will help target the patrols.

Colin Wilks, Director of Risca Rugby Football Club said, “Risca RFC has, for the wrong reasons, a history with the effects of dog mess on pitches.

“The PSPO initiative is a very positive programme, to educate pet owners and to ensure the health and safety of all our players.”

“Our sports pitches play a vital role in the wellbeing of local people and it is only right that they should be enjoyed safely. Unfortunately, there were many situations where sports clubs and others had to clean up dog mess before they could commence a match.

“We are proud to have a county borough with a wide range of open and green spaces that responsible dog owners can enjoy as an alternative to walking their dogs on marked playing fields.”