THE campaign to prevent Ysgol Mynydd-y-garreg from being closed by Carmarthenshire County Council took to the streets today, Sunday (Jun 27). The campaign has made the headlines in local and national press.

Children and parents walked the two miles from Mynydd-y-Garreg School to Kidwelly to highlight the dangers for children if they have to travel to a new school. At present many walk or cycle to school in line with Welsh Government targets to reduce pollution and promote active travel.

The school, which has received exemplary results for education is home to around 36 children with another 30 being registered at the cylch meithrin.

Parents and governors argue that there will be more children in the years to come as new housing developments are completed. The Save Our School group argue that Carmarthenshire County Council could use the Welsh Government 21st Century schools modernisation fund for bringing the small school up to standard. They also maintain that the school has been deliberately void of investment in order to force the issue of closure.


A consultation is still underway but campaigners claim that this was also established under the premise of the school closing. After some pressure from parents and politicians the council extended the consultation period.

The group have proposed alternative options including upgrading the present school, adding 21st century modular buildings to the present school or knocking down and rebuilding the present school on the same site. Governor Sue Woodward also suggested that the council could use Welsh Government funds to invest in the school for future generations. Sue who has a masters in Business Studies said that the group had made a business plan and studied the financials and that it would only take a small amount each year to keep the school within the community. We are looking at thousands rather than millions. The community of Mynydd-y-garreg pays an awful lot of council tax and they get very little in return. There is nothing here. No post office, no shop, no pub, no library, no office space. How does this align with the Welsh Government’s policy for us to work closer to home, to walk, to cycle, to reduce emissions and to increase the number of Welsh speakers? Whole families meet here at the school every day and chat in Welsh. After school they get together again in the park and chat in Welsh. New people coming to live in the village opt for the small school and it is incredible how quickly the non Welsh speaking children become fluent in Welsh.”

Kidwelly Town Mayor Chris Peters-Bond spoke to us following the march and said that he fully supported the parents in their efforts to stop the school from closing. You can listen to the full interview with the Kidwelly Town Mayor here:

Sarah Davies said she was worried that the children would be in danger having walked the route on a Sunday with cars parked on pavements. 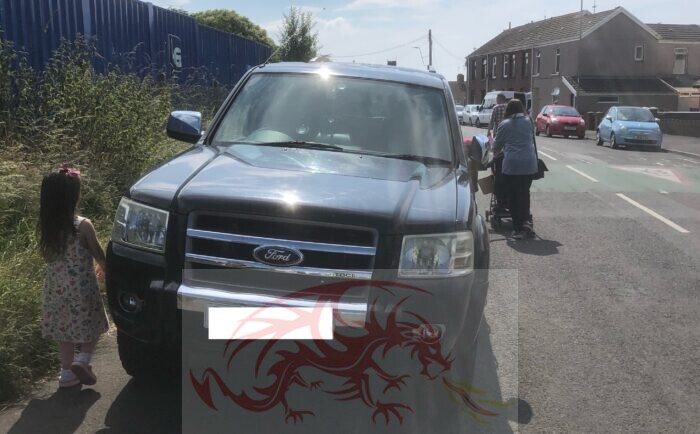 She said: “You can see in this picture my child disappearing down the side of a jeep while a mum pushes a pram on the road holding her 4 year-old by the hand. This is Priory Street (our route) on a Sunday let alone the double parked parents on a Monday morning. Pavements are so narrow parents have to walk on the road. We had to cross several road junctions, which at school drop off and pick up times will be manic. How can this council justify putting our children’s health and safety at risk? This is an accident waiting to happen.”

Watch the video of the march here:

Other politicians have lent their weight to the discussions on the schools modernisation plan. Llanelli MS Lee Waters said:
“We listened to what the parents and residents of Mynydd-y-garreg had to say, and we’ve offered our support in challenging the manner that this consultation is being carried out. The parents raised legitimate concerns about the figures being used by education officers to make decisions about school closures. Given that there is a presumption against closure in the updated Welsh Government guidance, we think it is only fair that the council be pushed harder to justify their reasoning for closing Mynydd-y-garreg.”

Nia Griffith MP said:
“Pupils, parents and staff are all under the cosh at the moment dealing with home learning and all the other disruption caused by the pandemic. Carmarthenshire Council really need to be more sympathetic to the circumstances and to all of the detailed concerns that their proposal raises.
The impetus is on the Plaid Cymru run Council to prove their case to the local community rather than the other way around. I agree with the clear feeling from campaigners that the consultation must be genuine and constructive so that all of the factors affecting the future of education in the area can be properly taken into account before any decisions are made.”

Cllr Glynog Davies, the Executive Board Member for Education, said that the council was complying fully with Labour Welsh Government guidelines. Indeed, he said, the government had complimented the council for arranging virtual drop-in sessions and engaging in telephone inquiries. Pointing to the success of the consultation channels, he stated that there had been 40,000 responses to council consultations of all kinds since the pandemic started, compared to just 11,000 the previous year. Cllr Davies urged parents and others to make full use of these channels of communication during the remaining schools consultation period.

The SOS Mynydd-y-garreg campaign group have stated that they are not opposed to improvements in education and school but they question why those improvements cannot be made at the present school which serves the village, which they claim is growing in numbers.

The only option on the table in the consultation is based on the premise that the existing school will be closed and campaigners claim that this is not a consultation with teachers, parents and children but a pre determined decision by councillors and officers who have no idea of the dangers children face en route to school, the importance of the school to the community and the impact the closure will have on the village.

Campaigners claim that the cost of providing enough safety such as a walk bridge over the busy bypass as well as upgrading all routes to the proposed new school outweigh the costs of focusing on the existing school. They claim that the school has been neglected and that the council have failed in their duty to maintain the school including the health, safety and wellbeing of children and staff. They are calling on the council to invest immediately in the essential works needed to make the school ‘fit for purpose’.

The council made the same claims when they wanted to move the site of the Ysgol Dewi Sant school in Llanelli to a greenfield site at Llanerch. Campaigners criticised the council for making the same claims that the school was not fit for purpose yet the children and staff remained and still remain at the school with no sign of investment.

The issue of the consultation is an emotive one, which campaigners and politicians are claiming is impacting on the health and well being of parents and children during an already difficult year of restrictions.

The family of Ray Gravell also joined in with their support and said that they wanted the council to keep the school open for future generations in Mynydd-y-garreg. Ray’s wife Mari and daughters Manon and Gwenan still live in Mynydd-y-garreg and have been supporters of this new campaign.

Welsh language campaigners and singer Non Parry have also lent their support to keep the schools open. Ffred Ffransis of Cymdeithas yr Iaith said that the council were missing the point and that the new school should be used to move those who were not in Welsh Medium education to the school and leave an existing and successful Welsh Medium school where it is.

A spokesperson for the Welsh Government said: “Local authorities have to make sure there are sufficient schools providing primary and secondary education for their area, and when making any significant changes, they must comply with the school organisation code.

“In 2018, we revised the code to include a more detailed set of requirements when an authority proposes to close a rural school, along with a list of schools designated as ‘rural’ for this purpose of presumption against closure.

“While local authorities may still close rural schools, the case for closing them must be strong and all reasonable alternatives have to be explored.”

Like what we do? We have a small favour to ask. We are an independent news service and we get very little support by way of advertising and funding. Please help maintain our free independent community news service.
Click to Donate and Support Our FREE Independent Public News Service