Planning rejected for Ystradgynlais houses due to flooding concerns 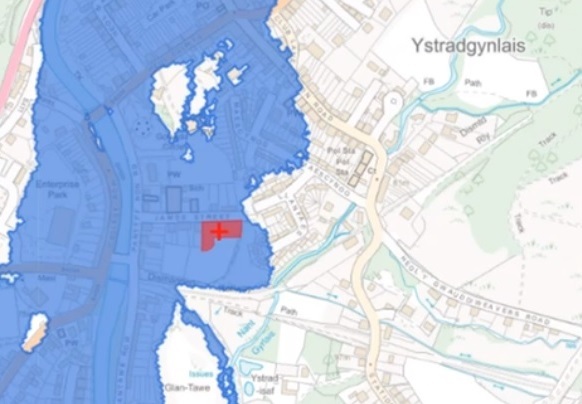 PLANS to build homes in part of Ystradgynlais, which is in a flood zone, have been rejected

After the school closed in 2012 applicant Glyn Price bought the plot, so that he could build a retirement home for himself, and a family home for his son.

The application which has been recommended for refusal by planning officers, had been “called in” front of the planning committe by local county councillor Susan McNicholas (Ynyscedwyn – Labour).

Cllr McNicholas told councillors that the family had bought the land from Powys County Council in the belief they could build on it.

But, environment body, Natural Resources Wales (NRW) had objected to the development as it is is a C2 flood zone near the river Tawe.

According to the advice, it’s not safe to build homes in a C2 flood zone

Mr Price, told the meeting that he believed that it was possible to build the homes, in such as way that they would be high enough to avoid even a one in 1000 year flooding possibility.

Mr Price, said: “We know that our field has never flooded even through the recent storms Ciara and Dennis (February 2020).

“These proposed properties are for our own families use.

“We are not building just to resell and make a quick profit.

“Would we really want to build them if we thought we’d have to go through the heartache of our families being flooded, with all the stress that would entail?

“We believe we have realistic, common sense, practical answers to the theoretical problems thrown up by the computer generated predictions.”

“There are many sites in Wales currently blighted by this zoning that makes planning farcical, I can’t see a problem with this,” said Cllr Wilkinson.

Cllr Linda Corfield (Forden – Independent) added: “Local knowledge is a better indicator of what is actually going on.”

Cllr Kathryn Silk (Bwlch – Liberal Democrat), said: “My experience of flooding is such is that it would lead me to avoid any more development in these areas.

“These zones could go for decades without flooding, but such is the nature of weather if not the climate, that all of a sudden, areas which have not flooded in the past, have been subject to extraordinary floods.

“I would be concerned about giving my approval to this development, I think it’s just too risky.”

Cllr Jon Williams (Llandrindod East/West – Action for Powys) wondered if there was anything the applicant could do to make the site, “more acceptable”.

Planning officer, Tamsin Law, told the committee that the applicant could challenge the C2 flood zone designation with NRW.

Cllr Francesca Jump (Welshpool Gungrog – Liberal Democrat) asked whether the application could be deferred to allow for such a challenge to take place?

Planning professional lead, Peter Morris, said: “It is feasible to challenge the map, but that’s a separate process, we’ve got to work with the evidence and information we have in front of us.”

Cllr David Selby, (Newtown Central – Liberal Democrat), said: “Sadly we’ve had to make decisions before in similar cases taking local peoples version of what is flooding compared to NRW, and I don’t suppose this is going to be the last time either.”

He moved the motion to accept officers advice.

The motion was seconded by Cllr Silk.

The vote was nine for, five against, and three abstentions, to refuse the application.