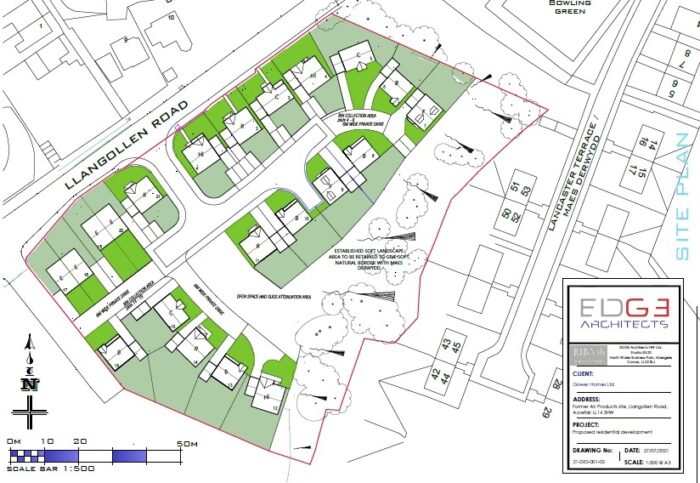 A TOTAL of 21 new houses could be built on a former manufacturing site in Wrexham under plans revealed this week.

An application has been put forward to develop an area of land at the Air Products site in Acrefair, which was previously home to a car park and offices.

It has stood vacant for around a decade after the factory was closed, resulting in approximately 200 job losses.

Gower Homes now wants to create a mixture of three and four-bedroom houses on the plot off Llangollen Road.

It follows a larger, adjoining area of the Air Products site, where permission has been granted for 232 properties, being sold to Clwyd Alyn Housing Association for £3.5m earlier this year.

In a planning statement accompanying the latest proposals, architects acting on behalf of Gower said: “The statement has been prepared in support of a full planning application for the proposed residential development on a currently disused site off Llangollen Road, Acrefair.

“The site was previously part of the former Air products factory, and this portion of the site was mainly used as a car parking area and offices.

“The site is currently vacant and covered in hardstanding.

“The application lies within the defined settlement limit where residential development is acceptable, and that development will not be at a detriment of the character of the area.

“Indeed, the development of the site will make a positive contribution to the locality.”

If approved, the application would result in the creation of 17 detached and four semi-detached properties.

The site covers around one hectare of land in total, with proposals for the main access point for vehicles to be built off Llangollen Road.

The architects added that the amount of traffic generated by the scheme would be “relatively low” and not result in a negative impact on the wider road network.

A decision will be made on the plans by Wrexham Council at a later date.