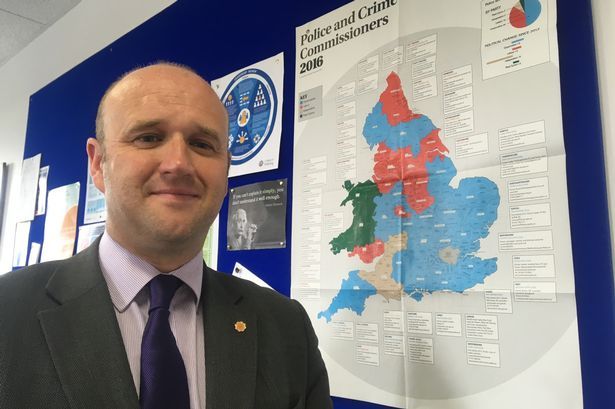 TESTING needs to be rolled out so police officers who are self-isolating can return to the front line if they don’t have the coronavirus, Dyfed-Powys’s police and crime commissioner has said.

Dafydd Llywelyn said that around 5% of the force’s workforce of 2,000 – which includes support staff and police community support officers – were self-isolating as of the end of last week.

He said he fully understood that frontline health staff should be prioritised for testing, but hoped this will be scaled up.

“If a police officer doesn’t have it (coronavirus), they could be out operationally,” said Mr Llywelyn.

“These frustrations are not unique to policing.”

The commissioner revealed that the force’s Llangunnor headquarters, near Carmarthen, has been split into three locations for operational reasons for the time being.

Many support staff are working remotely from home.

He said: “The police are going about their business in a relatively similar way (to normal).

“We are still going to all calls. We have seen some reduction in demand – people are self-isolating and there isn’t the town centre disorder.”

He said it was likely that officers would have more of a role backing up emergency health services in the community.

The force is part of a multi-agency group which plans for a range of hazards, including health emergencies.

Mr Llywelyn said he had picked on up public concerns about the volume of visitors travelling to West Wales, and was “lost for words” about the vast numbers of people heading to national parks and other beauty spots.

“I’m quite exercised about it, if I’m honest,” said Mr Llywelyn. “I think it’s such a blatant ignoring of national guidelines.”

Measures have subsequently been taken in parts of West Wales to curb large numbers of people gathering in a place.

Mr Llywelyn said people should take exercise in their local area, but must maintain a two-metre distance from others.

“Heed the Government and health service advice,” he said. “We should be taking social distancing more seriously. Only travel when essential.

“But I don’t want people to panic.”

Mr Llywelyn and his wife – a teacher – have five children, aged two to 18.

“My wife will be working certain days,” he said. “We will try and juggle as best as we can.”

Commissioners are elected officials who appoint chief constables and set a force’s budget, but they can’t tell police how to do their job.

Plaid Cymru’s Mr Llywelyn, who was standing for re-election before the election was postponed for a year, is working from a building near his Llandysul home and is in regular contact with chief constable Mark Collins.

“The chief constable is making the decisions,” he said.

“It’s so pleasing to see the commitment of staff. They have been exceptionally professional and are ready to play their part.

“This is where the blue light services come into their own.”