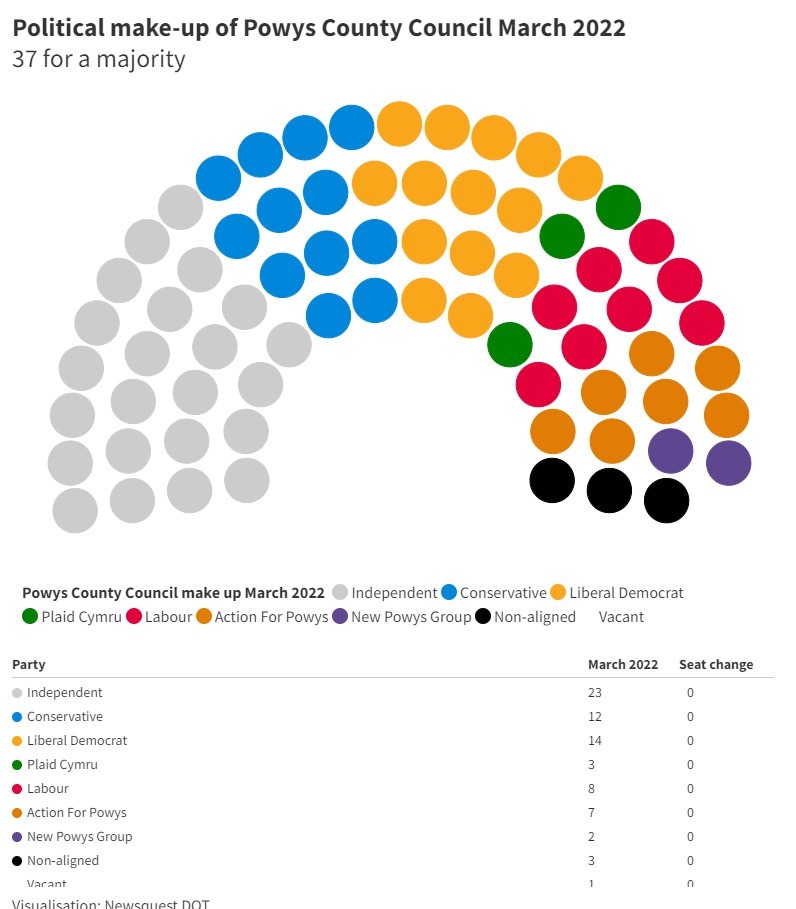 POWYS County Council is seen as a bastion of Independent councillors in Wales. Out of the 180 candidates hoping to be elected on Thursday, May 5, there are more independents standing than for any of the official political parties.

In 2017, all independents were part of one big group.

But by the end of the council term this year, that big group had fragmented into three groups.

While not having one central manifesto, each independent candidate will be campaigning on issues that affect their own wards.

After Friday, May 6, it is expected that those elected will once again come together to work as a collective.

Council leader between 2017 and 2022, Rosemarie Harris is hoping that voters will continue to show an independent turn of mind.

“We are what it says on the tin, independent.

“We do act loosely as a group, but not a political one and we don’t have a general manifesto, we’re independents for a reason.

“We have different challenges in each area really as well as issues that are relevant to the council like building affordable housing, the economy and jobs, developing broadband in the county and awarding contracts and sub-contracts so that we can keep the pound in Powys.”

“All the priorities relate to the vision (Vision 2025) that we’ve had as a council over the last five years.”

These priorities in Vision 2025 are:

Developing a Vibrant Economy; Providing integrated Health and Care in a rural environment; Strengthen learning and skills and Supporting Residents and Communities.

“Hopefully when we get back after the election it will be about keeping social care going, as we can see there will be vastly increased costs of all kinds.

“We have to address climate change, but only within the budget that we’ve got, we’ll do our very best within the services.

“People are generally happy with the services the council provides, there is the odd thing but they appreciate and understand quite well that there’s been a lack of funding in Powys for a number of years, it’s improved during the last couple of year.

“I’m hopeful we’ll get more Independents back in.”

Former Wales rugby international Jeremy Pugh was part of the Independent group up until the autumn of 2019, when he and several others left to form their own group,Action for Powys.

He says that he has several independent candidates who are willing to follow his lead, and he hopes that they could become the majority independent group after the elections.

“My main aim is to have everyone work together rather than stone throwing.

“We need to start looking at education in a different way, can we deliver rural school education.”

“The most important part for me is post-16 education, it’s not broken, it doesn’t exist.

“In this day and age we should be able to deliver and support people studying courses and staying in Powys.

“That would give our young people the option of staying and being supported with their further education.”

Sorting out council debt would also be a priority and he believed that the schools transformation programme, with the increase in costs, could add a further £40 million to be repaid on top of the the current £19 million debt repayments.

This would affect the delivery of other services.

To help the economy Mr Pugh believes there is a need to unleash Powys’ potential to create electricity, he said that this could entice industry into the county.

Another key for Mr Pugh is to look at using Day Care Centres to help more home carers by giving them up to 10 hours a week of respite care help.

“They could be helped with five hours rest twice a week would be good for their wellbeing – it’s saving the council millions of pounds – but it’s not recognised.”

The Green party have three candidates standing in the election and will be hoping that they are elected so they can put their “principles of social and environmental justice into action.”

“Our Green New Deal for a just and sustainable future will not only protect our environment but also provide jobs and strengthen public services, supporting those who were left behind by Labour and Conservatives as old Welsh industries declined.

“Quality of life and the wellbeing of current and future generations are at the heart of our beliefs.”

A new name for Powys political aficionados is Propel.

Propel has one candidate standing in Powys and the party was founded by former Plaid Cymru Senedd Member, Neil McEvoy.

They have a “contract” with the people of Wales.

“There are clear challenges out there facing our communities. Propel proposes to deal with the issues of 2022 head on.

They pledge to review council management structures, that council’s generate income to help provide jobs, build affordable housing as well as bringing redundant and empty buildings back into use,

They also propose to make changes in Social Services.

There is also a candidate for the Freedom Alliance: Supporting Medical Freedom.

Freedom Alliance say they are committed to preserving and upholding the principles of bodily integrity, medical freedom, and informed consent.

“Freedom Alliance is a pro-choice party and does not believe any individual should be discriminated against for their personal medical choice.”