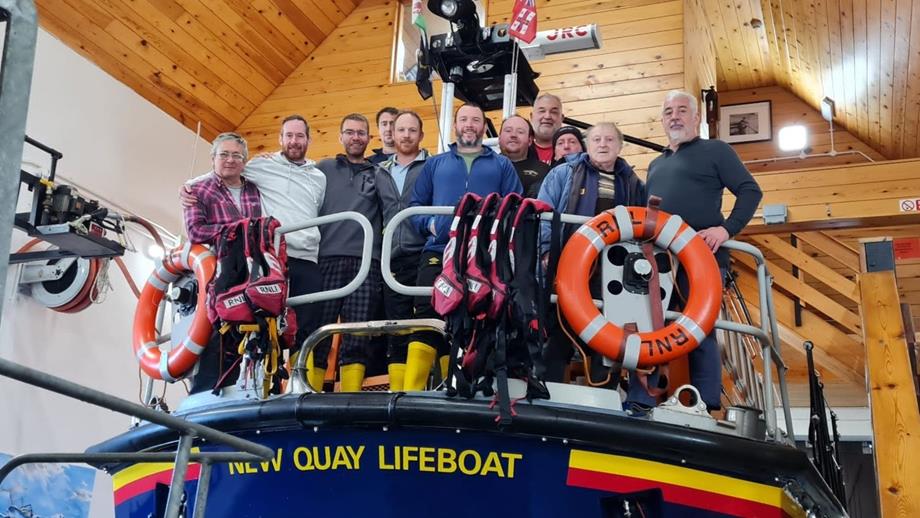 The four sailors plucked to safety off the coast of Ceredigion in gale force last week have spoken out to praise RNLI volunteers from Barmouth and New Quay for their “sheer professionalism”. The men were travelling from Ireland to Aberystwyth in an ocean rowing boat as a training exercise in challenging sea conditions.

A Coastguard rescue helicopter was asked tasked and placed a winchman on board the vessel to assess the casualties. It was decided to airlift one of the group with head injuries directly to hospital.

The crew from Ireland are home safe and well and keen to show their gratitude to the RNLI volunteers who launched in such challenging conditions.

‘The weather came in much quicker and much worse than we had predicted. The relief on seeing that lifeboat coming towards us was immense. I have nothing but praise for the professionalism and efficiency of the RNLI volunteers who saved our lives, they were quite simply remarkable. We were brought back into the shelter of New Quay and the crews were so welcoming and hospitable. They were genuinely overwhelmed and grateful that there had been a positive outcome.

‘We’re back home with our families now, but our loved ones could have been facing a very different Christmas this year had it not been for these fantastic volunteers. I’d urge everyone to support their Christmas appeal this year as you just never ever know when you’re going to need their help.’

‘In my 44 years as a lifeboatman, I’ve been on hundreds of shouts, but I can honestly say I’ve never felt such satisfaction and relief that these men were recovered safely. I’m not ashamed to say it, there were tears on that boat on that day. The look on their faces when we reached them will stay with me for a very long time.

‘Nothing compares to that feeling of being able to know hand on heart you contributed to saving someone’s life. The fact you can return them safely to their families is job satisfaction on another scale. Our vision is to save every one and I hope people will continue to support us in being able to do this and support our Christmas appeal this year.’

Over the past decade, RNLI lifeboats have launched over 1,200 times during the festive period. But these rescues would not be possible without donations from the RNLI’s generous supporters, helping to fund the essential kit, training and equipment needed by lifeboat crews all year round.

With thousands of volunteers around the UK and Ireland, each RNLI crew member signs up to save every one from drowning – it has been the charity’s mission since 1824.

To donate to the RNLI’s Christmas Appeal, visit: RNLI.org/Xmas