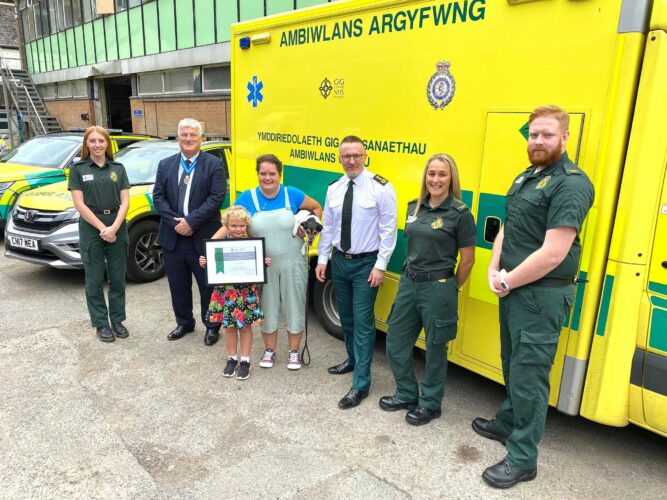 A SEVEN-year-old girl has been credited for saving her mum’s life by talking to emergency services as her mum had a severe asthma attack behind the wheel on a dual carriageway.

Katherine Holifield and daughter Isla were driving on the A449 in Monmouthshire when Katherine – who has brittle asthma – began struggling to breathe at the wheel of her Toyota Yaris.

The 37-year-old pulled into a layby and called 999, but physically unable to speak through heavy wheezing, the call handler could not locate the pair.

The Welsh Ambulance Service used the what3words technology to pinpoint their exact location and organise help.

As Katherine’s breathing worsened, Isla took over the call and calmly directed the ambulance service to her mum by telling the call handler to look out for a ‘red car’ with a kayak on the roof.

Katherine, of Cardiff, recalled: “We’d spent the day kayaking in Monmouth with friends.

“I felt a bit tight-chested when we got off the water but just put it down to the fact we’d been doing quite a bit of strenuous activity.

“We’d started to make the journey home but I wasn’t getting any better, I was getting worse.

“Recognising it was an asthma attack, I pulled into a layby and got my nebuliser out to try and help.

“I’ve had brittle asthma since I was a month-old and have managed it by entire life with inhalers and nebulisers, but this one was especially bad.

In this extraordinary 999 call, Katherine tries to summon help but is physically unable to tell the ambulance service where they are.

The Trust used the what3words technology to establish the pair’s exact location, and as Katherine’s condition deteriorated, quick-thinking Isla took over the call.

Call handler Madison Vickery, who is based in the Trust’s Clinical Contact Centre in Carmarthenshire, said: “I could tell straight away that Katherine was really struggling to breathe.

“She was physically unable to describe their location, so I sent her a text message containing a link to the what3words website so we could try and find them.

“The three words – ‘configure, audio, plodding’ – put them on the A449 just outside Llandenny in Monmouthshire, so we were then able to organise help.

“Isla was so lovely and hugely helpful in answering the questions and passing on information.

“You could tell that she was worried about mum, so I was trying to chat to her about other things to keep her mind pre-occupied.”

Katherine, a service co-ordinator at Cardiff-based Haven Home Care, said: “Isla was so calm and concise when she was giving information to the call handler.

“She was upset but she was just on a mission with it.

“She did all of this with our Jack Russell, Roly, in the car too.”

Newly-qualified paramedics Harriett Thomas and Will Jones came to Katherine’s aid, pulling into the layby behind her vehicle.

Will, who joined the Welsh Ambulance Service in December, said: “It was clear when we got there that Katherine was in massive respiratory distress.

“For us, it was about trying to stabilise her breathing enough to get her in the back of the ambulance – all while traffic was hurtling past us in the next lane.

“Isla was very sweet and was holding her mum’s hand throughout.”

Harriett, who joined the service in October, added: “As well as trying to treat Katherine, we also had Isla and Roly in the mix.

“Although Isla had a tear in her eye, she was so calm and collected.

“You’d expect a child to be erratic in the circumstances but she was just so chilled.

“She was a little superstar.”

With Katherine and Roly in the back of the ambulance with Will, and Isla in the front with Harriett, Katherine was taken to the Grange University Hospital in Cwmbran.

Discharged that evening, she is now recovering at home after the attack on 12 August.

She said: “There are periods when my asthma is very good and periods where it goes completely off the rails.

“On average, I have an asthma attack every 2-3 months, and usually have to call for an ambulance around twice a year when they’re that severe.

“I had Covid-19 last April which just seems to have exacerbated the problem.”

Katherine added: “I can’t thank the ambulance service enough for what they did that day.

“They didn’t just see me as the patient – they treated Isla like a patient too, making sure she was cared for at all times.

“It’s the little things, like fitting her car seat in the front of the ambulance so she could travel safely and making sure she had her Nintendo Switch to keep her occupied on the way to hospital.”

This week, Katherine, Isla and pooch Roly met call handler Madison in person to say thank you, and were also reunited with Will and Harriett.

The Trust’s Chief Executive Jason Killens, who presented Isla with a commendation, said: “Isla remained cool, calm and collected in the face of an extraordinary set of circumstances.

“Her actions that day helped us to find and triage Katherine in a time-critical emergency and probably saved her life.”