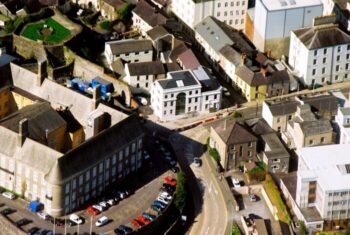 The carers help with washing, dressing and preparing meals, and use a hoist to move him.

“I could never manage without them,” said Mr Mabbett’s wife, Christine, who is his main carer.

“I would be absolutely stuck.”

She said they generally had the same carers each time, until recently when recruitment shortages started to bite in Carmarthenshire and elsewhere.

“Lately we’ve had different ones, but it doesn’t matter – they are as good as gold,” she said.

Mrs Mabbett said they normally came at roughly the same times each day, but would phone if they were going to be late.

She said her husband, who is 73 and had his stroke four years ago, could talk and that his mind was fine.

“He is okay most of the time,” she said.

The Llanelli couple have four children, two of whom live fairly nearby.

Mrs Mabbett said she was entitled to a certain amount of respite care each year – times when her husband would go into a nursing home – but never took up the full amount.

It had come in handy though when she broke her hip a couple of months ago.

She also has help from a charity called Crossroads, which provides volunteers to sit with Mr Mabbett for six hours on a Saturday and Wednesday afternoons.

“They are marvellous,” she said.