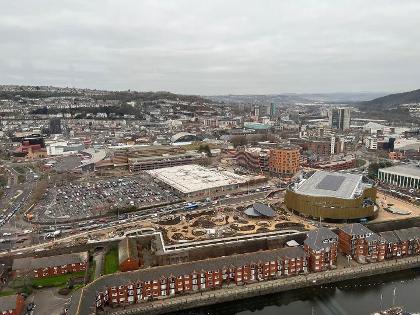 THE scale of private sector investment in the £1.24bn city deal for the Swansea Bay City Region remains small, but it is still relatively early days.

Private money is key for the wide-ranging programme of investment in nine projects, which were devised to boost economic productivity and create well-paid jobs across Swansea, Neath Port Talbot, Carmarthenshire and Pembrokeshire.

Heads of terms for the 15-year deal were signed by central and local government leaders at Swansea’s Liberty Stadium – now Swansea.com Stadium – in 2017, but it has taken longer than expected to start rolling them out. Originally there were 11 projects, but the number was reduced by two.

A report going before the committee which oversees the Swansea Bay City Region said £20m of private sector funding has been committed so far, just over three per cent of the £625m total.

It described this as small, but added: “However, as per the financial profile the private sector is not expected to accelerate until year seven (2024-25) when programmes and projects are maturing and becoming operational.”

The four councils and other public sector partners involved in the city deal will contribute £380m to the £1.24bn portfolio. The remaining £235m is coming from the Welsh and UK Governments.

Nearly £158m – or 13% – of the £1.24bn has been spent, with by far the biggest investment on the Swansea Waterfront and Digital District project, which includes the new Swansea Arena.

Joint committee members will be given updates on the projects at the meeting and presented with internal and external auditor reports.

All of the nine projects have now been approved, with an event marking this milestone held at Llanelli’s Parc y Scarlets at the end of March. UK and Welsh Government ministers David TC Davies and Rebecca Evans both spoke at it.

Senior city deal figures warned last summer that construction costs were rising – some by up to 30%.