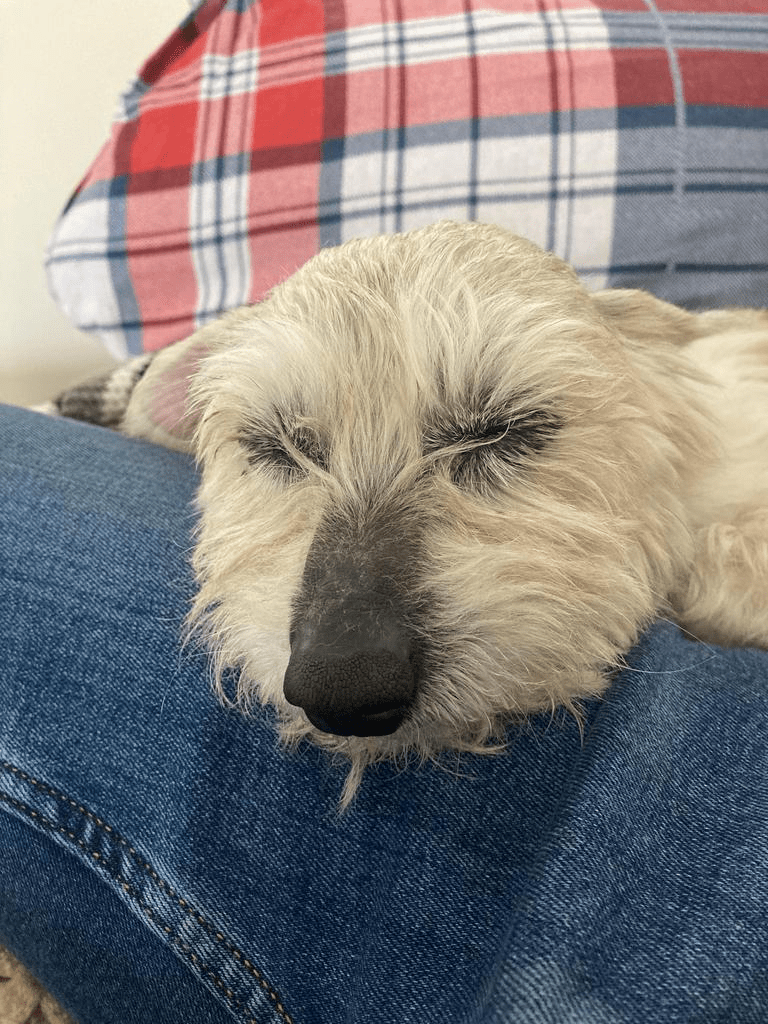 An elderly blind dog who came into rescue in Wales at the age of 11 has got a bright future ahead of him after his “cheeky personality” won over his foster carer who decided to permanently adopt him.

Golden oldie Tiny Tim, described as “young at heart,” was in a very poor condition when he arrived at the RSPCA’s Llys Nini Animal Centre in March after his elderly owner was no longer able to care for him.

As well as sight loss, the little Westie was suffering from a range of health issues including an ear infection, sore skin and a severely matted coat, which had to be shaved in places to make him more comfortable. His teeth, however, were in remarkably good shape for a dog of his age.

Now, three months later, Tiny Tim is thriving with his fosterer Sally Humphries, who has become so attached to the cheeky dog – whose antics include stealing food from the fridge when she isn’t looking – that she’s decided to adopt him permanently.

He is even being taught clicker training by Sally – a type of reward based training where a clicker is used to tell a dog that they have done the right thing – and responds to his name and to instructions such as, ‘sit’, ‘lie,’ ‘step up’ and ‘step down’.

“When I first got Tim home I set up a camera to monitor how he was coping and we started by keeping him on a lead and doing laps around different rooms to help familiarise him with the space,” said Sally, who is also the kennel team leader at Llys Nini Animal Centre. “I put different textures in certain places, for example, a rug in front of the sofa and a towel under his water bowl to get him used to his surroundings.

“Despite his advancing years and the fact that we were advised he would probably need palliative care, he’s got a real zest for life. He’s definitely young at heart and I’ve had to be quite fit to keep up with him! When we go out and about I’m his eyes, so that means doing things like making sure other dogs do not approach him too quickly. He loves being taken for a walk and sniffing out new smells and he’ll climb up on things if you’re not looking, so his blindness isn’t holding him back.”

Sally added: “Although I didn’t initially plan to adopt Tim, he’s completely won me and my dad over with his cheeky personality. He’s settled in so well and really enjoys the company of my other rescue dog, Lady.

“As time went on, I felt it would be unfair to expect him to start all over again with someone new and strange surroundings, particularly at his age, and more so because he’s blind.

“He’s wonderful company and a great example of how an older dog with a disability has so much to give and get out of life.”

Blind dogs are no different to sighted dogs in terms of their ability and desire to learn. Training, using positive, reward based methods is an excellent way to strengthen the bond between a dog and their owner and help the pet learn important life skills and behaviours.

As well as supporting him with his sight loss, Tiny Tim’s skin will also need to be closely monitored by Sally for the rest of his life and his ears bathed daily.