TRIBUTES have been pouring in on social media for Welsh radio presenter and voice of Parc y Scarlets Andrew ‘Tommo’ Thomas who has passed away at age 53.

Twitter has been full of comments from the radio and rugby fraternity, many mention his career on radio and his popularity at the Scarlets stadium.

@marcwebber tweeted: Another Welsh radio legend has passed away today. Andrew ‘Tommo’ Thomas -voice of Radio Carms and once of BBC Radio Cymru. 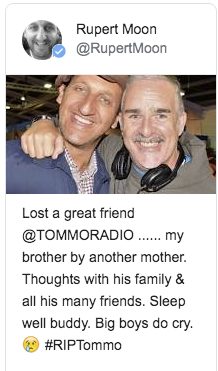 Chaplain for the Scarlets Reverend Eldon Phillips paid the following tribute to Tommo.

“Firstly I would like to send our heart felt condolences to Andre’w family. Our thoughts are with them at this very sad time.

“The news came out of the blue, he was a big pal of mine and it is a huge loss for the club.

“Tommo loved the scarlets He was the match day announcer. He started at Stradey Park. When PYS opened Tommo was on the touchline. He was so good at it. His personality suited the wor.

“He was joyous humorous and very professional. He had all the skills for the job. He was person people related too. He was a broadcaster of the highest order.

“Tommo had worked for Radio Ceredigion and then Radio Pembs and Scarlet FM. For a couple of years he worked for Radio Cymru. He was at his best when he was amongst the people. He was good at getting the best out of people and was an outstanding broadcaster.

“It is so sad that we have lost both Chris Needs and Tommo in such a short space of time. He and Chris were similar. He was non stop, he always called me Rev.

“He was still a young man. He was a legend in West Wales. He was a proud welsh man with Welsh as his first language.

“Another of his skills was in communicating so easily in both languages. He was a real professional he was the announcer for Wales football for a while.

“The tributes on social media have been amazing. It shows how highly he was regarded here in Wales and elsewhere.”

Tommo presented the breakfast show on Radio Carmarthenshire, Radio Pembrokeshire and Radio Ceredigion. In 2011 he won the Radio Presenter of the Year award for stations serving up to 300,000 people.

The presenter joined BBC Radio Cymru in 2014 with a show from 2 to 5pm Monday to Thursday.

In February 2018, he announced that he would be leaving Radio Cymru and returned to Nation to present a new program between 11am and 3pm.