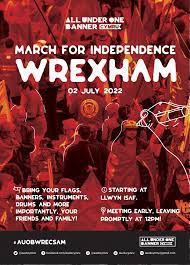 CAMPAIGNERS have welcomed a local authority’s U-turn on banning them from using an area of public space to hold a Welsh independence march.

Wrexham Council came under strong criticism this week after it told organisers AUOB (All Under One Banner) Cymru they could not book the Llwyn Isaf field in Wrexham for this Saturday’s event.

Council officials refused permission for them to use the site outside the town’s Guildhall, citing rules which state that political events are not allowed.

The decision was blasted as “ridiculous” by Plaid Cymru councillor Carrie Harper, with campaigners vowing to defy the ban.

However, the authority announced yesterday afternoon (Tuesday, June 28) it would allow the march to go ahead as planned after reconsidering.

Local organiser Pol Wong said he was happy with the reversal as he believed the original decision went against Human Rights legislation.

“Obviously we’re pleased with the re-thinking of the initial decision and this is a victory for the independence movement against what was an undemocratic stance from the council.

“Human Rights are of course universal, so we very much hope to see the council leadership review their current policy which as we have stated, we believe to be unlawful.

“We’re looking forward to talking about the future of Wales and there is an open invitation for everyone who is interested in hearing more to come and join in the conversation.

“It will be an amazing event, the police in particular have been a huge support and provided great guidance. ”

The row over the use of the field started last week following correspondence between the council and the organisers of the march.

It came after Rachel Cupit, Wrexham’s town centre manager, sent the campaigners an e-mail in which she said she had taken advice on the event from the authority’s legal department.

She said it would contravene protocol surrounding the use of Llwyn Isaf and nearby Queen’s Square,  which was first put in place in 1998.

But it was announced yesterday that Saturday’s event could take place as scheduled.

“We have reviewed the application to use Llwyn Isaf on Saturday 2 July.

“In line with our policy and usual approach, we would not usually agree the booking of Llwyn Isaf for marches and rallies.

“However, we recognise the rights of freedom of expression and freedom of assembly and in the circumstances we will not be taking any action to prevent the use of Llwyn Isaf on Saturday.”

Leaders of the council’s independent/Conservative coalition have also released a joint statement denying there was ever a ban in place.

They said the protocol was most recently updated in 2011 to stop the far-right English Defence League from using Llwyn Isaf to hold a rally.

“The event has been in the headlines this week after claims the council was trying to ‘ban’ the march. This isn’t the case, and we want to set the record straight.

“An official request from the organisers to use Llwyn Isaf was turned down, and this was based on a council protocol that states the green should not be used for political rallies.

“The protocol was put in place in 2011 due to concerns about extreme-right groups – who were very active back then – wanting to use Llwyn Isaf for marches and rallies.

“The policy was supported by all political groups on the council at the time, and was seen as a common-sense approach to help prevent potential community tensions and disorder.

“However, the council has never said it would try and prevent the independence march this weekend, and we – as political leaders at the council – have never made any attempt to ‘ban’ or stop the march going ahead.”

The independence rally is due to start on Llwyn Isaf from 10.30am on Saturday, with the march beginning at 12pm.

A number of performers have been lined up, including singer Dafydd Iwan, whose song Yma o Hyd has recently become popular with supporters of the Welsh national football team.