Ammanford – the profile, masterplan and people who work there 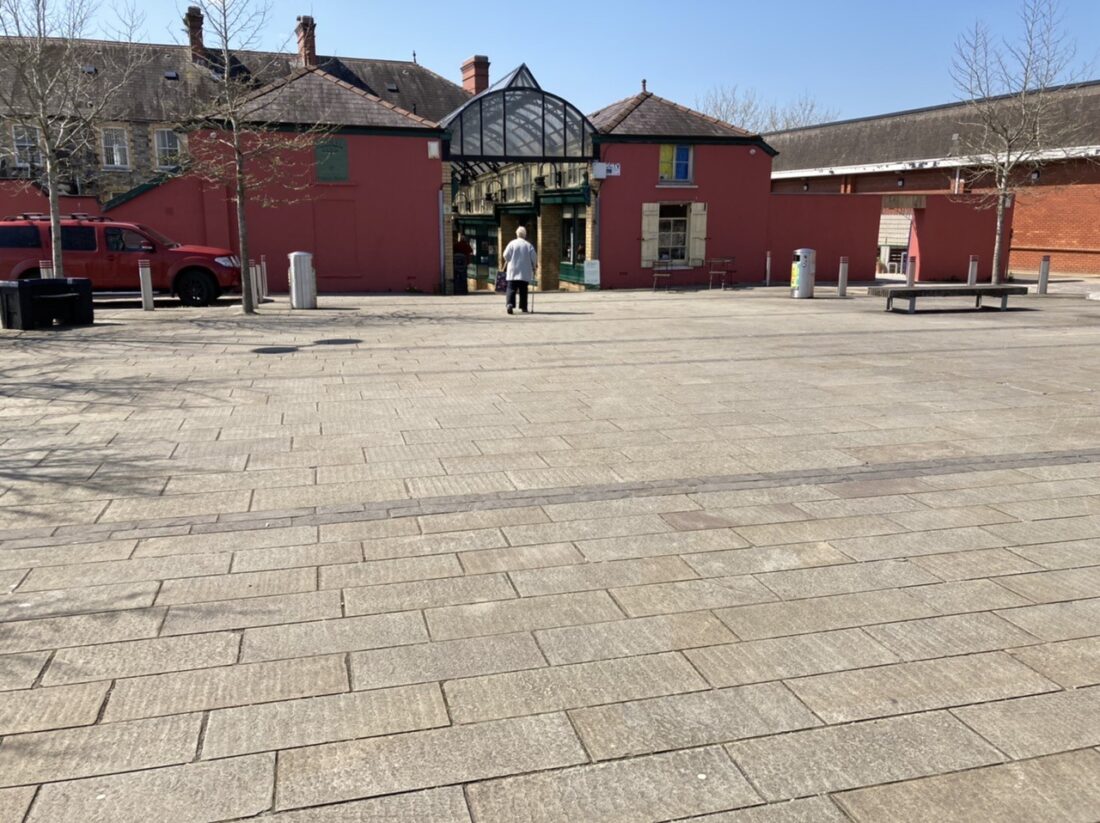 But he said there was another Cross Inn in northern Carmarthenshire.

Due to the growth in Ammanford’s population caused by the expansion of the mining industry, letters were occasionally mis-directed to the wrong Cross Inn. So a series of meetings were held to decide on a new name for Cross Inn, and Ammanford was chosen.

Before a bridge was built across the river Amman in 1890 connecting Ammanford to the village of Betws, the river Amman could only be crossed by a ford, hence the name Ammanford.
“The influx of people into the area to take advantage of the opportunities offered by a rapidly expanding mining industry caused the population to grow from the 258 folk recorded in the 1851 census to over 6,000 in the 1911 census,” said Mr Norman.
After peaking in the 1950s the number of mines was cut, and the last mine in the valley, Betws New Drift Mine, closed in 2003.
Mr Norman said:
“Several light engineering factories replaced mining for a while but the the decline in a once-vibrant economy has been steady and remorseless, a fate shared with all the former mining regions of England, Scotland and Wales.”

At first glance the presence of Poundstretcher, Home Bargains, Card Factory, Wilko and Greggs can make today’s Ammanford feel like other towns, but there is more than meets the eye.

Yes, there are empty retail units, a lot of charity shops and enough hair salons and barber shops to service a small city, but independent shops seem to be holding firm and the hospitality sector would thrive even more if enough staff could be found.

In March, Carmarthenshire Council’s cabinet approved a masterplan for Ammanford which aims to give the county’s third largest town a better chance of post-Covid recovery.

Safeguarding existing businesses and helping new ones take root were key considerations. It said there was growth potential in particular for leisure, food and drink, and health and beauty operators.

The weekly Friday market at the bottom of Quay Street should be developed, it said, with the space it occupied being upgraded to form a defined square for events.

The objectives of the masterplan included attracting families and younger people, and unifying the disjointed areas of the town centre through better road design, pedestrian links and more use of open spaces.

The masterplan identified “an appealing range” of local independent businesses – many making specialist goods – outside of the town which could be encouraged to establish a presence in the centre.

It added that Ammanford needed to effectively communicate what the town centre had to offer, and grow local loyalty.

One option would be to set up a business improvement district, as has happened in Llanelli and Carmarthen.

A Brompton bike hire scheme in those two towns, it said, could be considered in Ammanford to link either of the train stations at Pantyffynnon and Dyffryn Road with the town centre and the bus station.

Planning has become more streamlined in the town centre due to the recent introduction of a “local development order”, which provides general consent for the ground and upper floors of buildings, removing the need for planning applications and lowering barriers to new uses and investment.

The masterplan said commitment would be needed from everyone, and that it was unlikely that all the priorities could be tackled at once.

“All the actions identified support recovery and long-term growth,” it said. “Where more complex but high priority projects are identified, early development of outline business case and design development should be prioritised.”

What looks good on paper may not necessarily translate completely into success on the ground but the plan was prepared with input from businesses and other interested parties.

Views on the town centre and what could be done to improve it were mixed during a visit by the Local Democracy Reporting Service.

Optimism was tempered by the cost of living crisis and a worry that people will crimp spending further when energy bills are expected to rise again in the autumn. But there was a strong undercurrent of goodwill towards the town and support for traders.

Much of the town centre is split by a busy traffic light T-junction serving the A483 – main trunk road – and the A474. Lorries chug past towards Llandeilo or the M4.

It can’t be helped but it doesn’t exactly have you yearning to wander around.

A few yards up from the junction is The Arcade, at one end of which is Vive La Crepe, run by Helen Davies. She set up shop there three years ago after running a burger van in Glanaman for a decade.

“I started getting too cold in the winter!” she said.

“Ammanford is a busy town but since the pandemic a lot of places have closed. We are optimistic, and hoping that we will get a good summer.

“We have got some amazing customers – wonderful people. But after Covid, we don’t know where we are from one day to the other. Some days are we are busy, other days we are dead.

“People are a bit more cautious spending their money, especially going forward with the cost of living. We’ve had to put our prices up – we couldn’t absorb any more.”

Mrs Davies created a courtyard area for customers last summer, and is not alone in calling for more free parking in the town – there is currently free parking in short stay car parks from 10am to 2pm on Monday, Tuesday and Wednesday.

One of the council’s plans for Ammanford is making more use of a large paved area at the end of The Arcade, but Mrs Davies reckoned it was fine as it was.

How about some greenery and more items to brighten it up, I asked? Mrs Davies said vandalism was a concern. “If it’s not nailed down,” she said, not needing to finish the sentence.

But she remained upbeat. “It’s a lovely town and has so much to offer,” she said.

Francis Rees’ butchers shop, Y Cigydd, is on Wind Street – effectively the A483 at it nears the main T-junction.

Parking issues niggle him. Customers can’t stop outside because of double yellow lines, but he said people with blue badges do leave their vehicles there and shop in the town for up to three hours, although this is allowed.

Mr Rees said Ammanford was less busy than it was 10 years ago when he began working in Y Cigydd, which he now owns.

“I’d like to see less charity shops and second-hand shops, and maybe less rates for businesses,” he said. “It’s not just Ammanford, it’s the same everywhere.”

Mr Rees said customers used to spend up to £60 to £70 during Covid when fewer retailers were open.

“Now it can be down to three or four pounds,” he said.

I walked down Quay Street and Heol Wallasey, and by coincidence an elderly woman parked her car on double yellow lines there, checked her blue badge was visible, and strolled off.

Pedestrianised Quay Street has gaps to fill, and I’m told the scaffolding on the grand old Lloyds Bank building has been there for ages.

“They are talking about extending the market, which is at the bottom – I think that would be quite nice,” she said. “It’s something different, and could bring more people in.

“I am optimistic, but cost of living would be my big concern. You could notice the difference at the beginning of April, when energy bills went up. It was quite eerie. People have said about tightening their belts.”

Fearing another energy hike later in the year, she said: “By Christmas you wonder what the high street is going to be looking like.”

Chris Brown said he believed the town had declined but was starting to pick up.

He lives on the outskirts of Ammanford and runs collectables stall Back in the Future, at Shoppers World market, Wind Street.

“Ammanford is rather off the beaten track, but a lot of people have moved into the area,” he said.

“Property is selling super, super quickly, and I have seen a lot of new faces. I think that is possibly going to be good for the future of the town. And I know the council have massive plans.”

He added: “You need to attract bigger businesses. You need high street names. There are some nice pubs, and I think a big fixed market would be good.”

Hagar Fardi, who runs home improvement and curtain specialists’ Farstook Design, Shoppers World, is a relative newcomer to the town.

She moved from Cyprus to Swansea five years ago and opened her new venture in Ammanford during the pandemic.

“I like the area, and the people are very friendly,” she said.

“It is still quiet because of Covid, but I have a lot of ideas about having a bigger place. This was an opportunity for me, but maybe I will take a bigger shop.”

“They can work from home, and are selling up in places like Sussex and London,” she said.

“The commercial market isn’t so buoyant though. It’s a shame the banks have closed, except for Lloyds and Principality.

“But there are new restaurants and bars. I’m very supportive of ‘local’. I think maybe there needs to be more for teenagers, and the children’s park needs sorting.”

Further down Wind Street is The Cottage Inn, where manager Stefan Butler was positive about the hospitality sector and night-time economy but worried about retail.

“There is a buzz about town in the evenings,” he said. “We are trying to bounce back, and there has been significant investment in Ammanford recently.

“Blas restaurant (opposite) has had a transformative effect on the town, I think. But retail – that’s a different story.”

Mr Butler said recruiting chefs has been a big challenge of late – a view endorsed by Helen Rees, the owner of Blas.

She said the venue was open three nights a week and five days a week, but was designed to serve customers seven days and nights a week.

“It’s just impossible due to the shortage of staff,” she said, although she said she had 29 full-time, part-time and casual employees.

“And then the cost of living is rising. People are being a bit more careful.”

Miss Rees said it had taken six years to create Blas from the chip shop and house which pre-dated it.

It clearly has been a major piece of work.

“It’s just about ready, and I’m glad I’m at the end of the project,” said Miss Rees. “It’s been a lot of blood, sweat and tears. I really, really want it to work.

“I have had a lot of support though. I live in Ammanford and I’m raising two children. I do want Ammanford to have things to offer.”