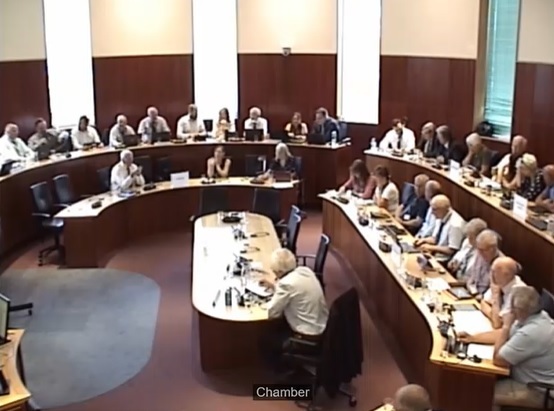 THE plan to introduce a Public Spaces Protection Order (PSPO) in Haverfordwest town centre has been under discussion for some time, with a public consultation on the matter, as well as previous debates by Pembrokeshire County Council.

At full council on Thursday (July 14) members heard there had been a “disappointing” response to the consultation and those responses received had been mixed.

The proposals were brought by the town’s five county councillors, initially prompted by anti-social behaviour and drinking issues at the skate park and were developed in partnership with Dyfed-Powys Police.

After a lengthy debate the introduction of a PSPO was approved 30 votes for and 21 against, with four abstentions.

Cllr Jacob Williams reiterated his previous objections to the proposals, adding concerns about the map of the enforcement area which “includes almost all of Haverfordwest.”

The PSPO gives police and PCSOs additional powers for three years to issue a fixed penalty notice of £100 if someone fails to comply with a request to cease consumption of intoxicating substances in a designated area.

“This was brought in with good intentions,” said Cllr Williams but on “civil liberties grounds” he was shocked to see what was now being proposed.

“I think this is way over the top and not a proportionate response,” he said.

Cllr Williams also asked how many signs would be required to publicise the order, which will now include many residential streets, and what the cost to the council would be but officers did not know.

Other agreed, including Cllr Tony Wilcox who said it is “like prohibition in all of Haverfordwest” and Cllr Jordan Ryan said the area covered should be reduced.

Former police officer Cllr Huw Morgan said “the tool box is overflowing” with laws and legislations to deal with such issues, adding “the evidence doesn’t support his measure.”

There was support for the proposal, with Haverfordwest councillors David Bryan and Tim Evans reiterating the need for extra “tools” to allow the police to remove people drinking alcohol and causing anti-social behaviour.

Cllr Evans highlighted that the map had been developed with police adding “we have had these conversations with the people that actually do the job in our town.”

Cllr Mark Carter added “if there’s not a problem, what’s the difference” with reference to the amount of residential area included in the PSPO map.