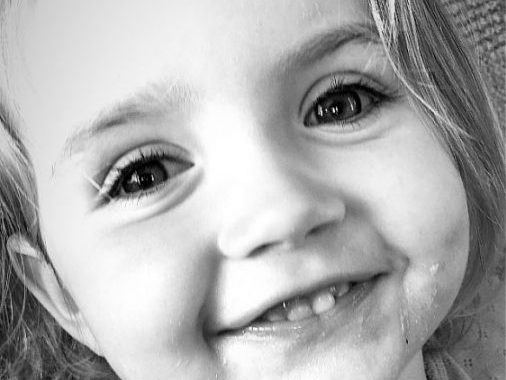 A family has raised £2,000 for the Wales Air Ambulance after the service recently saved the life of their two-year-old daughter.

The Charity’s Dafen-based helicopter attended little Evie Jamieson in West Wales after she was involved in a vehicle accident in March 2020. On board that day were consultant Gareth Roberts, critical care practitioner Rhyan Curtain and pilot Nobby Norriss.

Following lifesaving treatment at the scene, the toddler was airlifted to the University Hospital of Wales in Cardiff, where she was in a critical condition.

The family did not know what the outcome would be but after spending seven weeks at the Noah’s Ark Hospital – two of which were in intensive care – they were able to bring Evie back home to Carmarthenshire.

Her grateful mum, Jessica, said that Evie’s recovery has been difficult. She explained: “We needed the support of the Wales Air Ambulance to save our baby girl’s life, and that’s certainly what they did. Without the helicopter and the amazing medics that attended to Evie, she wouldn’t be with us today. Evie is just incredible, she’s the most caring loving little girl.

“Evie’s still got a way to go, she’s now having physio twice a week to get her back up on her feet and she’s smashing it, she’s such a determined little girl nothing can get in her way. She’s home and that’s all we could have wished for – and that’s all thanks to the Welsh Ambulance Service paramedics and the Wales Air Ambulance crew.

“We are so grateful for the support from our family and friends. This week is 14 weeks, and every week is a week of progress.”

The family-of-four, which includes Evie’s dad Dug and her little sister Elsie, have completed a 15-mile walk/cycle in aid of the Charity.

They have already topped their £500 target, raising over £2,481. Jessica kept the fundraising fun for the girls, and they did a 10-mile cycle ride together with lots of singing and laughing.

Reflecting on what the Charity means to the family, Jessica said: “I read stories like this online and you don’t think anything could happen to you, until it does and your whole world turns upside down.

“You depend on these medics to save lives and they depend on our donations. We, as a family, can’t thank the medics enough for what they’ve done for us. They did all they could to keep our Evie with us today.”

In the future, the family plan on doing more fundraising.

Mark Stevens, Wales Air Ambulance South Wales Fundraising Manager, said: “We are so grateful that our service was able to help Evie. Her ongoing recovery, and the desire of the family to raise money for us so soon after the accident, shows incredible resilience. It’s inspiring and we are thankful to them for their fundraising.

“We were able to save Evie’s life thanks to the skill of our crew and thanks to the people of Wales who give so generously to our Charity.”

If you would like to donate to Evie’s fundraiser, visit her Just Giving page – Jessica’s lucky to be having family walks being a family of 4 page https://www.justgiving.com/fundraising/jessica-prosser2

There are several ways that the public can continue to support the Wales Air Ambulance. These include online donations, signing up to the Charity’s Lifesaving Lottery or by coming up with their own innovative ways to fundraise at home – like Evie. Further information can be found via www.walesairambulance.com.

Alternatively, a £5 text-message donation can be made by texting the word HELI to 70711.