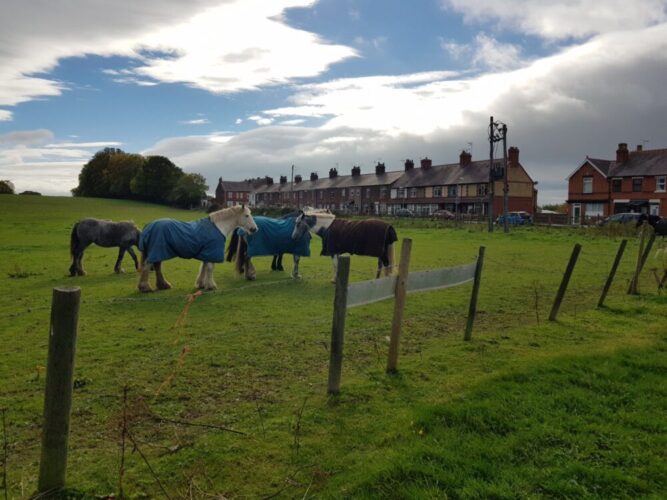 CONTROVERSIAL plans to build more than 100 new homes in a village in Wrexham have been given the green light following a successful appeal.

Glyndwr University was previously denied permission to develop a grazing field in New Broughton in the face of widespread opposition from the community over the loss of green barrier land.

The proposals were also met with criticism from a council highways officer because of the impact on the roads surrounding Wrexham Maelor Hospital.

The university launched an appeal as it said the sale of the site on Gatewen Road would be crucial to funding improvements worth £60 million to its main campus on Mold Road in the town.

The decision by members of Wrexham Council’s planning committee has now been overturned by a planning inspector, which means the construction of a total of 112 properties will be able to go ahead.

Aidan McCooey, who was appointed to oversee the case by the Welsh Government, acknowledged the scheme would go against planning policies designed to protect the countryside.

However, in his decision report, he said any concerns were overridden by the benefits it would bring to the area.

He said: “The proposal would make a significant contribution to meeting the council’s housing requirement and addressing the shortfall in supply that has persisted for some years. This factor should be given substantial weight.

“The site is allocated for housing in the emerging Local Development Plan, after a series of studies considering the options to accommodate the identified housing requirement.

“It is well-contained by the existing built form and as such would not erode the green barrier.

“I consider that the substantial benefits of the proposal in terms of its contribution to housing supply and affordable housing; its sustainable location with good walking/cycling links and public transport provision; and the fact that it is allocated in the LDP weigh heavily in favour of the proposal.

“All these factors combined constitute the very exceptional circumstances required to clearly outweigh the harm to the green barrier.”

In July 2019, councillors approved seven of the nine applications put forward by the university as part of its Campus 2025 programme.

But the New Broughton proposals were rejected alongside an application for 74 properties on a sports field on Dean Road in Rhosnesni.

During the planning meeting, highways officer Peter Douthwaite made a number of damning comments about the impact on the area’s road network.

It included concerns that it would cause gridlock on Berse Road, which is close to the town’s hospital.

In response, Mr McCooey said he believed any issues would be addressed by proposed improvements to the main junctions off the A483.

He said: “The council and objectors refer to significant queuing occurring at these junctions at the moment.

“It is important to note that the congestion is an existing issue and is restricted to relatively short periods of the day.

“Welsh Government has consulted on proposed improvements to the A483 junctions that would address the existing problems.

“The traffic arising from the development would represent around three to four per cent of all traffic.

“This traffic would have a relatively minor impact on the operation of the relevant junctions compared to the forecast overall growth.”

Whilst allowing the appeal, the inspector rejected a bid for costs to be awarded against the council over the original decision.