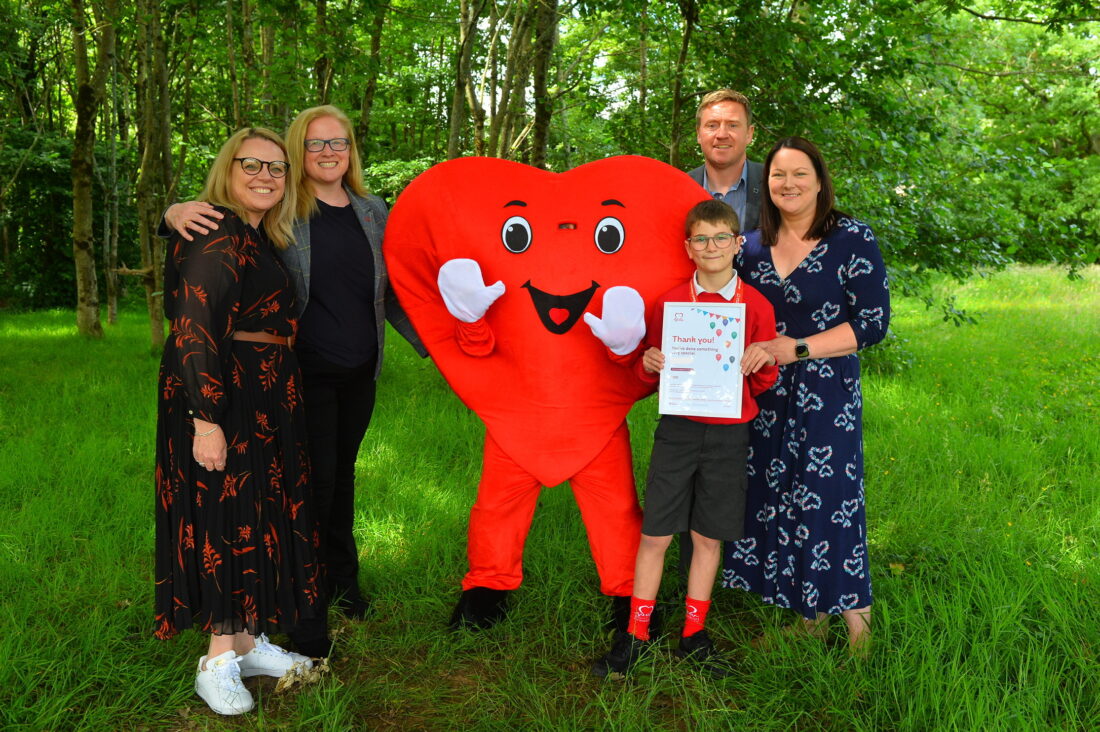 THE Chief Executive of the British Heart Foundation has visited New Inn Primary School in Pontypool to thank nine-year-old Ollie for his fantastic efforts to support the charity this year by taking part in sponsored running events and raising £900 – that’s £100 for every year he’s been looked after by cardiologists.

Ollie has a condition call Ebstein’s Anomaly, which means the valve which directs blood through the right side of the heart doesn’t work properly.

Ollie says: “My heart has a ‘glitch’ that is changing as I grow, and it means that I will need an operation to fix it. I run to keep my heart healthy and happy. I want to help all the heart doctors learn new ways to fix broken hearts and be the best that they can be in helping children like me.”

In March Ollie took part in the Junior run at Cardiff Half Marathon, and in May he joined in the Cardiff Bay Run Children’s Future Challenger 1 mile race, supported by his proud parents Kirsty and Steve, and his big brother Jack.

Ollie’s mum Kirsty says, “Cardiff Half was his first fundraising event, and his original target was to raise £100. He achieved this within hours, so he set a new target of £900, which he hit, and he’s set a target of £1,000 for October’s Cardiff Half children’s event to celebrate his tenth birthday.”

Kirsty adds, “After the Cardiff Half children’s run, we returned the following day for the adult’s event, to meet the BHF Cymru team and cheer on Ollie’s auntie who also ran for the BHF. Ollie proudly wore his BHF t-shirt and shouted from the side-lines words of encouragement, pride, and motivation! He was pleased to get some high fives from fellow supporters!

“Ollie is already planning his next event, doing what he loves, doing it with a huge smile and raising money and awareness for a charity close to our hearts. We are looking forward to supporting our enterprising, inspirational young man!”

Ollie was presented with a BHF medal and a certificate of thanks from the charity at a special assembly in front of his friends.

Dr Griffiths said, “It’s always a privilege to meet anyone whose life has been affected by a heart condition, and to hear how the research and support the BHF has provided for over 60 years has helped them; but meeting a young person like Ollie is a very special thing indeed.

“He’s a truly inspirational young man, a credit to his family and his school. I was delighted to be able to recognise Ollie’s brilliant support for the BHF and hear how he’s using his fundraising for us to keep his heart healthy too.”

The BHF Cymru team were invited by New Inn Primary School Deputy Headteacher, Mrs Catherine Hooper, to speak to the pupils’ Charity Ambassadors about the work the BHF funds in Wales. Mrs Cooper says: “Our Charity Ambassadors welcomed the opportunity to hear from the BHF about their work. They were delighted to meet the charity’s CEO and Welsh team to find out about how fundraised money is spent in Wales. We are very proud of Ollie and his family for raising a large amount of money for a great charity.”

Head of BHF Cymru Rhodri Thomas says, “Today in Wales around 340,000 people are living with the daily burden of heart and circulatory diseases, and around 16 babies a month are diagnosed with a congenital heart defect in Wales. In the last 5 years [2016-2021], the BHF has funded £9.5m worth of research in Wales, supporting the work of 64 research staff in Welsh universities.”

Nikki James, BHF Area Fundraising Manager for Wales and Northern Ireland adds, “We are so grateful to Ollie, his lovely family, and everyone who chooses to support the BHF. With their help, the BHF funds ground-breaking research that will get us closer than ever to a world free from the fear of heart and circulatory diseases, and a world of cures and treatments we can’t even imagine today.”

To find out about fundraising or volunteering for the BHF in Wales go to: www.bhf.org.uk/how-you-can-help/volunteer