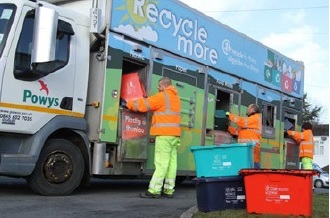 PROBLEMS with recruitment and Covid-19 are continuing to hamper rubbish and recycling collections in parts of Powys.

At a meeting of Powys County Council on Friday, the continued problems with rubbish and recycling collections was brought up for discussion.

Villages that are part of Conservative group leader, Cllr Aled Davies ward in the northern tip of Powys, residents have not had their recycling collected for a couple of weeks.

Cllr Davies brought up the issue during an item on funding new vehicles for the Highways Transport and Recycling department, where councillors needed to agree a “virement.”

This means moving money from one council account or budget to another and councilors agreed to the virement.

“I appreciate there are issues that have led to failures of collection in areas for up to two or three weeks sometimes.

“Can I ask for assurance that there are adequate resources in place to deliver the service.”

There are some issues at the moment, and we’re doing what we can to plug those gaps either with agency staff or recruitment.”

“We have about 10 vacancies in the north (of Powys) for operatives and loaders and we’re finding it difficult to recruit.”

Mr Brinn added that Powys were “not alone in this” and that other local authorities were experiencing similar problems.

Cabinet member for a greener Powys, Cllr Jackie Charlton explained that staff were “going to the extreme” to try and keep up with collections but there were still: “some being missed.”

“I think it’s worth mentioning that in the extreme heat this week our crews went out and managed to keep most services going across the county.”

This included Builth Wells, where many of the visitors to the Royal Welsh Show in Llanelwedd were staying said Cllr Charlton.

Cllr Charlton explained that to combat the heat, crews left their depots at 6am rather than 7am, to try and do more during a cooler time of day.

“We need to congratulate our crews as they went over and above what they would normally do,” said Cllr Charlton.

Cllr Charlton said that some crews from the highways department had also been brought in to help in areas where there had been staff shortages.

“There were six people off with Covid last Monday which added to the pressure of everything else that was going on.”

“We thank everybody for being patient, we’re sorry it happened.”

On the virement, councillors were asked to agree to moving £1,054,400 from Fleet Management Services to the Vehicle Replacement Reserve,

This money had been accrued from delaying the replacement of waste and recycling vehicles and keeping existing vehicles for longer.

Similarly, £226,000 that had been generated by Fleet Management Services from selling vehicles and equipment would also go into the Vehicle Replacement Reserve.

Money from this reserve will be used to buy new vehicles and equipment including where possible environmentally friendly versions.