Holyhead Coastguard alerted the Llandudno Lifeboat at 9.31pm on Tuesday 20 July requesting them to launch and proceed to the western end of the Little Orme to locate two people reported to be stranded on the cliffs 150 feet above the shoreline.

Llandudno’s RNLI inshore lifeboat Dr Barbara Saunderson made way as quickly as possible to locate the casualties and report their position to the other emergency services. Over the next hour and a half, teams from Llandudno Coastguard, North Wales Police, Ogwen Mountain Rescue and Penmon Cliff Rescue endeavoured to return the casualties to safety. 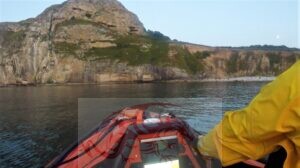 The operation was also joined by the UK Helicopter Search and Rescue (SAR) which was able to play a significant role in bringing the rescue to a safe conclusion.

Alun Pari Huws, Duty Launching Authority, said ‘Llandudno Lifeboat Station crew were pleased to be able to provide afloat safety support with the inshore lifeboat whilst this multi-agency rescue was carried out together with visual information from both the lifeboat and the boathouse on the location of the casualties – a good example of teamwork.’