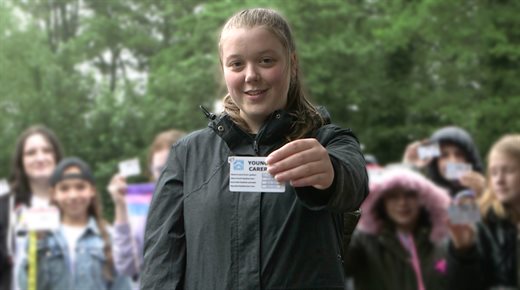 NEARLY 190 young carers in Torfaen have signed up for a national ID card, allowing them to be more visible within their communities.

To be eligible to apply for the Young Carers National ID card, individuals must be helping look after a family member who is sick, disabled, has mental health problems or is affected by substance misuse.

The National ID card scheme was launched by Carers Trust Wales in 2021 and allows young carers to easily identify themselves to professionals, without having to share personal details about their caring role.

For example, the cards make it easier for young carers to collect prescriptions and tell teachers about their caring responsibilities.

Brandon Furley, 15, from Cwmbran, cares for his mother who suffers from an undiagnosed neurological disorder, and is one of 189 young carers who have a card in Torfaen.

As his mum experiences multiple seizures a day, this requires Brandon to take on lots of tasks around the house.

During a typical day he helps prepare lunchboxes, puts washing away and helps his mum, who is wheelchair bound, to move around the house.

“Now I have my Young Carers ID card, I feel more recognised and it gives me a positive feeling that I am not alone”.

Being a part of Torfaen young carers has allowed me to do activities I wouldn’t normally be able to do. I really enjoy going to youth club and on residentials, where I have learnt to build a go-cart”.

“It’s fantastic to hear that all the young carers we know about have signed up for the ID cards, especially as the scheme was only launched last year.

“I now hope that other young carers who may not be aware of the cards, or the support we can offer them, get in touch. We want to help them be more visible and get the recognition they rightly deserve.”