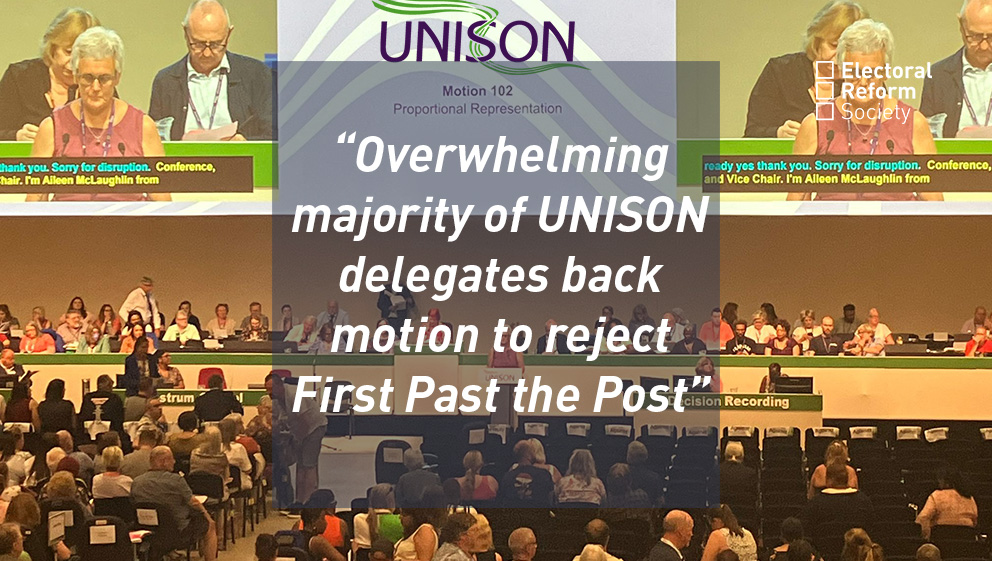 DELEGATES at UNISON’s National Delegate Conference have just backed a motion calling on the UK’s biggest union to ‘reject First Past the Post’ and for the adoption of PR for UK general elections.

The vote, which saw an overwhelming majority of delegates back the motion, marks a significant moment for the Labour movement, as Unite the Union, the UK’s second biggest union, voted to reject Westminster’s distorting and outdated First Past the Post (FPTP) voting system in October last year.

Campaigners for proportional representation from Labour for a New Democracy, and Politics for the Many (which is supported by the ERS) were at the conference all week, talking to delegates and running popular fringe events.

UNISON will now join a growing number of Labour affiliated trade unions in support of electoral reform alongside Unite, ASLEF, CWU, the Musicians Union and the TSSA

There is growing momentum across the trade union and Labour movement for PR. The vote comes less than a year after a motion on electoral reform was narrowly defeated at Labour Party conference due to a lack of support amongst union representatives despite 80% of local party delegates supporting the change.

“It should come as no surprise that support for proportional representation is growing when it’s clear that the status quo has failed so many for so long. Election after election too many voters see their voices shut out.

We need an end to our broken First Past the Post voting system and the winner takes all mentality that dominates our politics. Only a fair and proportional voting system can ensure that all voices across the country are fairly represented in parliament.

Opposition to Westminster’s broken voting system is growing and UNISON’s support for reform shows that the time for change is now. These calls for reform can no longer be ignored.”