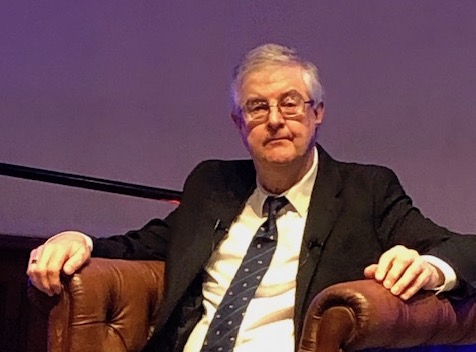 This morning, Friday (Jan 31) the First Minister for Wales, Mark Drakeford addressed a gathering at the Pierhead building In Cardiff Bay. His address was based on ‘Wales’ Future Relationship with Europe and the World’

Mr Drakeford began by saying that it was appropriate to meet at the Pierhead because it was there well over a century ago that the Welsh and Cardiff economy was at ‘centre of the trading world’, exchanging goods such as coal and people.

The First Minister emphasised that he was not present to refight the battles of the last three and a half years but to focus on Wales not only in a post-Brexit Britain particularly in a post-Brexit world. An opportunity to look forwards and set out what relationship Wales now wants with the European Union, and also with the wider world.

Mr Drakeford referred to the richness of Wales’s history stretching back to Roman and Norman times through to the rebellion of Owain Glyndwr and Cymru Fydd movement.

Welsh historic leaders were connected to European diplomacy and networks for centuries. Indeed Owain Glyndwr sought an alliance with the French and wrote to the King in Latin and French.

In direct reference to the nation’s place in Europe the First Minister said: “Our reputation in Brussels is of a place which has contributed to the EU, and we will retain office in Brussels – and our flag will continue to fly there as well.”

The First Minister went on to outline how the Welsh Government has also opened offices recently in Dublin, Paris, Berlin and Düsseldorf, promoting trade, tourism and culture.

The First Minister emphasised that Ireland was ‘Our closest EU neighbour’ and that freight and trade needs to ‘keep moving’.

Referring to the Welsh Government’s new international strategy Mr Drakeford said: “The idea of Wales having one wouldn’t have been possible pre-devolution.”

He referenced that Wales has been made chair of the European Vanguard Initiative, a network based on sub-state players including Flanders, Basque Country, Brittany and others.

Concluding Mr Drakeford said: “We leave EU with our heads held high, citizens of Wales and the world and ready to continue to be a European nation.”

In a question and answer session the First Minister was asked about the challenges for rural areas and farming and if the devolved nations would be participating in the formulation of the new trading relationship with the EU.

In answering a question from the former MP Gwynoro Jones about the future governance of Wales within the union he stated that ‘the UK Union must become a voluntary association of nations’. It was being a member of the EU that was the ‘glue that had held the Union together’. Leaving the EU he said ‘creates strains on that Union’ so the Welsh Government ‘will be there leading the call for reform’.